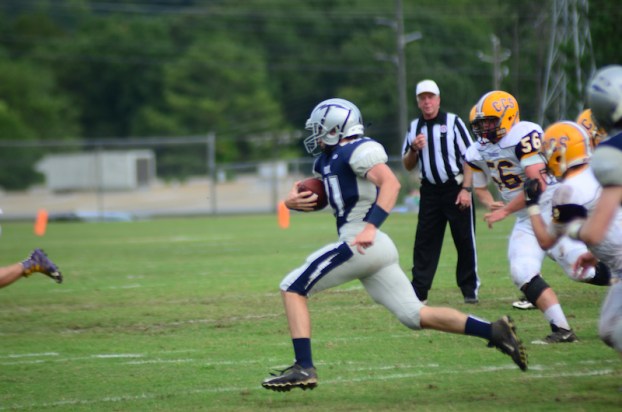 The tournament featured a four team bracket with the semifinals taking place on Wednesday, Nov. 9, and the championship and consolation game scheduled for Friday, Nov. 11. The Lightning opened up play by defeating Lancaster Christian Academy in the semifinals by a score of 36-12, which advanced them to the championship game where they faced the Hickory Hawks, who won 30-6 over Triumph in their semifinal matchup.

The Lightning and Hawks battled back and forth in a close first half, but in the end Hickory ended up running away with it to win by a final of 35-14.

The two teams battled hard in the first two quarters of play with the Hawks narrowly edging Evangel 16-14 at the half.

Hickory came out in the second half and went on a 90-yard drive in 6:30 behind some tough running to go up 22-14 after a missed two-point conversion.

On the ensuing kickoff Evangel was stopped on the three-yard line, but a facemask penalty got them out of trouble and moved them up to the18.

A few plays into the possession, quarterback Micah Murphy threw an interception over the middle of the field that was returned all the way to the five-yard line. The Hawks scored two plays later to go up 29-14 with five minutes left in the third.

Murphy set up the Lightning with good field position on the 50-yard line after a great kick return.

After two absolutely perfect throws from the quarterback, Evangel was set up inside the 30-line and threatening to score. Three plays later the Lightning faced a fourth down and short when senior running back Brad Baggett ran powerfully up the middle for a first down to get inside his team inside the 20.

Needing a score to get back in the game Evangel took four plays from inside the 20-yard line before they eventually dropped a pass in the end zone to turn the ball over on downs.

With nine minutes left to go in the fourth now, the Lightning had eaten up a chunk of valuable time and came away with no points. Hickory made it even worse when they came out the next possession and went on 7:30 85-yard touchdown drive to go up 35-14 and seal the Hawks win with 2:27 left in the fourth.

The Lightning’s season ended with an ACSC State Championship and as runner-ups in the NACA National Championship, it was truly a season for the books for Evangel.