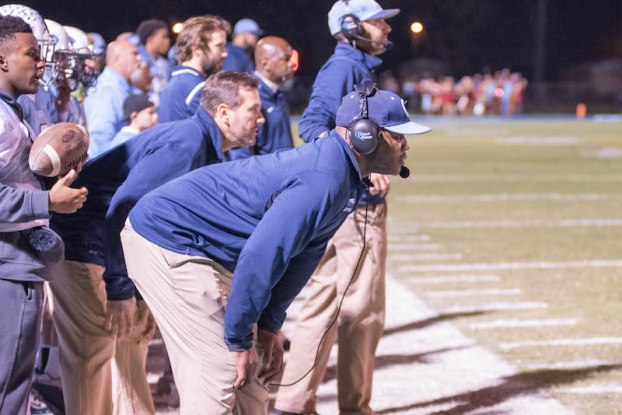 Calera fell on the road in the 2nd round of the playoffs at Carroll High School on Friday, Nov. 11, after racking up 13 penalties for 135 yards. (Reporter photo/Keith McCoy)

OZARK – After a thrilling 35-34 victory over Sylacauga in round one of the playoffs, the Calera Eagles (8-3) traveled two and a half hours south to Ozark to take on the undefeated Class 5A No. 2 Carroll Eagles. The game saw some controversial officiating as Calera racked up 13 penalties for 135 yards, compared to Carroll’s 3 penalties for just 35 yards.

Each big play Calera got seemed to be negated by a penalty, which was too much for them to overcome as they went on to lose the battle of the Eagles by a final score of 28-8.

Coming into the game, Carroll was only giving up 11 points per game on the season and had posted four shutouts. They held true to form in this matchup forcing 4 turnovers and holding Calera to 8 points on 227 yards of total offense.

Both defenses were awake in the first quarter as they held each other scoreless through one frame of play.

It was only fitting the first score of the game came when Carroll picked off Calera quarterback Quad Brown and took it 20 yards to the house to put them up 7-0.

Both teams seemed to wake up after this as Calera responded quickly on a nice drive that was capped off by a 2-yard DeCorean Mickens touchdown run to bring Calera within one at 7-6.

It didn’t take Carroll long to come back and answer that with a 9-yard touchdown pass of their own to take a 14-6 halftime lead.

Carroll came out of the locker room and put up the only score of the third quarter on a 25-yard touchdown run. With Carroll now leading 21-6, things got very interesting and weird for the remainder of the game.

Carroll was in punt formation near their own goal line on fourth down when the long snapper snapped the ball over the punters had. Calera’s Zakiyah Johnson tackled the Carroll punter in the end zone for a safety making the score 21-8 with 8:20 left in the game.

The score remained this way until 2:30 left in the game when punting issues arose again, this time for Calera as Carroll blocked a punt and ran it to add on another touchdown and seal the 28-8 win.

DeCorean Mickens led the bottled up offense with 71 yards and a touchdown on 11 rushing attempts, while Quad Brown was 12 for 31 throwing the ball for 93 yards and three interceptions. Yati Gant led all Calera receivers with 42 yards on 4 receptions. The great defensive effort was led by Jermaine Wilson with 7 tackles.

Briarwood advances to third round of playoffs