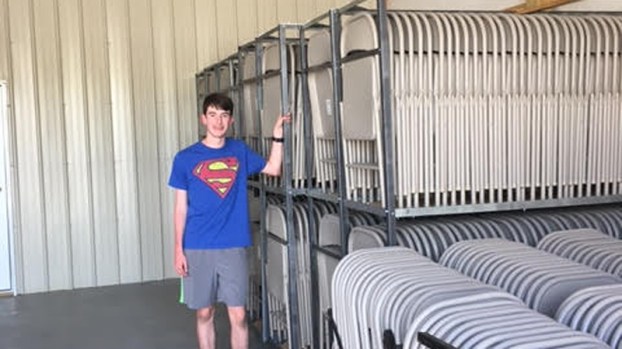 NORTH SHELBY – Wolfe Anderson is in the process of joining a long line of Eagle Scouts in his family after recently completing his project to construct eight steel chair racks for the Alabama National Cemetery.

“I am a fourth-generation Eagle Scout,” Anderson, 17, said. “The legacy I have has influenced me to strive to get the Eagle Scout and not let the time go by and let me turn 18, and not be able to get it.”

The Briarwood High School student spent more than a year planning, preparing and constructing his project for the Eagle Scout badge, the highest honor a Boy Scout can achieve.

Anderson, an Inverness resident who is a member of Troop 96, learned of a project to help provide storage for roughly 1,000 chairs used at the Alabama National Cemetery, located in Montevallo, next to American Village.

“I was speaking with my old scoutmaster and he recommended I get in touch with Bob Barefield, chairman of the support committee for the Alabama National Cemetery,” Anderson said. “I called him and he talked about the need for storage for the chairs they used for events throughout the year. I originally thought the project would take a few months, but I didn’t realize the scale of the project.”

In August 2015, Anderson met with his grandfather, an engineer, who helped him design the chair carriers.

“Once I got the project approved, I developed a prototype,” Anderson said. “I worked on the prototype and after lots of design changes I sent off the prototype for approval. I was told that I am the first scout in the Vulcan District to use or carry out a project that required the use of steel.”

Anderson and his dad, Jeremy Anderson, contacted a steel supplier, purchased the steel, and cut all of the pieces for the project themselves.

“Me and my dad spent a lot of time cutting steel,” Anderson said. “We definitely learned as we went along. We took safety precautions, but we didn’t have any training for cutting the steel so we just figured it out as we went along.”

Part of the requirements for the Eagle Scout badge is spending several work days on the project.

“We had three workdays where we had a lot of volunteers helping put everything together,” Anderson said. “The first two workdays consisted of a lot of drilling, and then we had another workday in October where we assembled everything. I really enjoyed being able to see all of the work we had done come to fruition. Toward the end it had taken so long so it was nice being able to see things finally coming together.”

Anderson calculated he spent roughly 370 hours on the project, including the help of other Boy Scouts and volunteers, and raised roughly $2,300.

“I enjoyed the project a lot,” Anderson said. “I learned the whole engineering and assembly process takes a lot more preparation than one might think and you have to realize that everything is not always going to go according to plan.”

Barefield said the project was a “godsend” in helping provide a more efficient way to store the chairs at the cemetery.

“We used to rent the chairs for all of the programs at the cemetery, but we found out we could buy them cheaper than renting them,” Barefield said. “We purchased 1,000 chairs and had them all stacked up in our building, but they were taking up space. These chair racks will really help us keep the chairs as new as possible and just the fact an Eagle Scout took on such a project was really incredible.”

Barefield said after meeting with Anderson and two officers with the support committee, they discussed what they needed at the cemetery.

“There were about three times that Wolfe came back to us with the things he was working on, and we refined what the process was,” Barefield said. “It has been a cooperative effort throughout the whole process from both ends. This was just a tremendous project that he undertook and a tremendous asset to us at the support committee.”

Anderson said he plans to complete a few additional merit badges before he can officially receive his Eagle Scout badge, but he anticipates completing them before the end of the year.