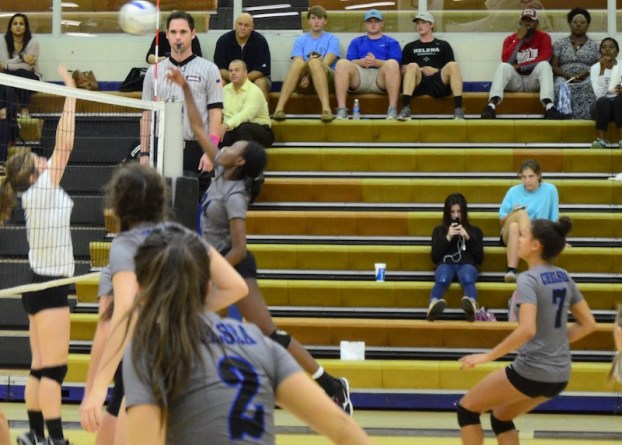 Riggins, 7, prepares for a dig after a Helena player goes up to block a Chelsea shot. The senior has now signed to play at the next level with Wallace State. (Reoporter photo/Alec Etheredge)

CHELSEA – Chelsea senior volleyball player Lexie Riggins signed her national letter of intent on Thursday, Nov. 10, to play volleyball at the next level with Wallace State in Hanceville.

Riggins has been on the varsity squad since her freshman year at Chelsea and has been asked to step up to lead her team on several different occasions throughout her career.

This past season she led the Hornets to 39 wins as opposed to just 9 losses, one of Chelsea’s best volleyball seasons to date. They won the Area 8 regular season championship before falling to Helena in a tough hard fought area championship match.

On the season the senior contributed 311 kills and also had 339 digs, 97 blocks, 49 aces and 37 assists. There were several times where she got on a roll serving the ball and would reel off several consecutive points for the Hornets.

Riggins will now continue her volleyball days at Wallace State, who just won their eighth straight ACCC tournament title. The Lions tend to be one of the better ACCC teams in the state every year and Riggins should help continue that successful trend in the near future.

O’Neil Roberson officially signed her NLI to play softball in the SEC with Mississippi State on Nov. 10. (Contributed) By... read more