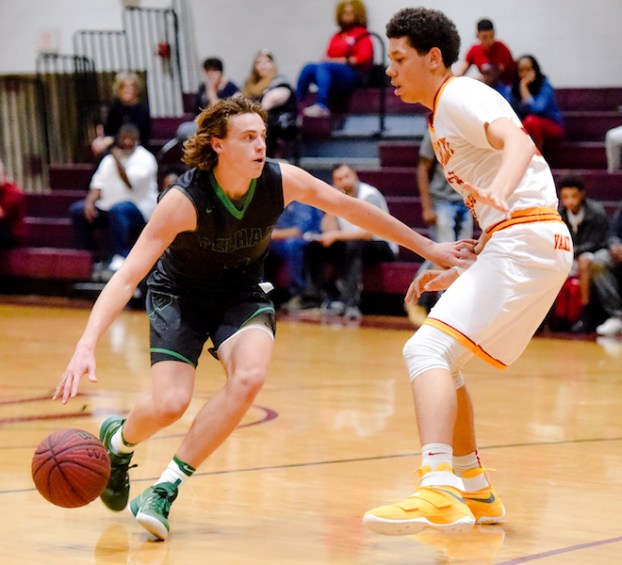 Pelham’s Justin Allison led the Panthers to a 69-59 win over Pinson Valley in their opening game of the 2016-17 season. He had 27 points, 4 rebounds, 4 assists and 4 steals on the night. (Contributed)

No Reese, no problem for Pelham

PINSON VALLEY – The Pelham Panthers opened the 2016-17 season with a 69-59 win at Pinson Valley on Tuesday, Nov. 15, despite the absence of Alabama commit Alex Reese.

The Panthers held a 17-point lead at one point in the second half, but the Indians clawed back and cut the lead to four points with less than two minutes left, but Pelham closed strong and held on for the win.

“The first game of the season is always an interesting one,” said Panthers Head coach Joel Floyd. “Add on top of that, playing a game during a school day where half the school attends makes for a fun test. Our guys responded well to the adversity. They played with great effort all game. It was a nice start to the season.”

Pelham scored first on a Mitchell Rottier layup by breaking down the Pinson Valley full court press. They wouldn’t look back the rest of the quarter as they jumped out to a 14-9 advantage.

The second quarter was a little bit of a different story. The Panthers found themselves trailing for the first time at 20-19 before reeling off a 7-2 run to take the lead back. They would go into the half with a 26-22 lead and not look back the rest of the game.

A big reason for that was the performance of junior point guard Justin Allison, who picked up the slack with no Reese. Behind Allison, Seth Torman, Mitchell Rotier and Derrick Bush, Pelham hit a groove offensively and went on an 18-5 run in the quarter, which gave them a 44-27 lead as they headed to the fourth.

In the final quarter of the game, Pinson Valley put a scare in Pelham after going on a 10-0 run early to cut the lead to 44-37. The Panthers started attacking the rim and answered back quickly with an 8-1 run of their own to go up 52-38 with 5:01 left in the game. Over the next two minutes of game time, Pinson Valley would go on a 14-4 run, which trimmed the Panthers lead to just four at 56-52. With 2:50 left in the game, Bush made two free throws, which sparked Pelham’s game-winning 11-7 run to make the final score 69-59.

Allison led the Panthers with 27 points, while he also added 4 rebounds, 4 assists and 4 steals. Bush had 11 points, Rottier had 10 points and Torman had eight points for the Panthers. The Panthers will play again this Friday night against powerhouse Mountain Brook, which should create for a fun environment.