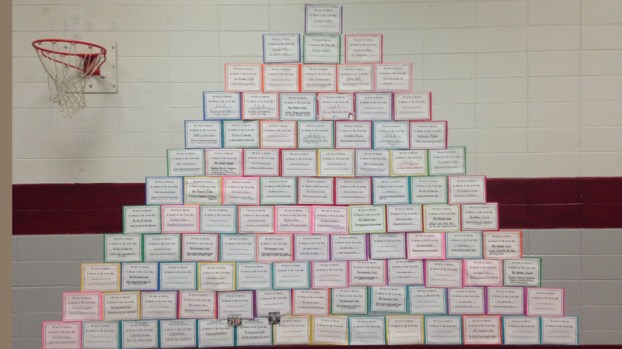 Elvin Hill Elementary School students and faculty celebrated Mr. Elvin Hill Day at 1:30 p.m. on Nov. 18. Students gathered in the gymnasium to learn about the life of their school’s namesake and about the impact he made on Shelby County.

Hill’s granddaughter and EHES teacher Hayden Jeffries originally came up with the idea as a celebration for Hill’s 99th birthday.

“I came up with the idea for all of the classes here to do a few acts of service so that, together, we would have 99 acts of service for his 99th birthday. A lot of the kids don’t know anything about him, and he was very well known for taking care of kids and being a servant and a leader. His birthday falls during Thanksgiving Break, so we thought that the day before the break would be a great time to teach them about him,” Jeffries said.

EHES faculty incorporates ideas from the book, “The 7 Habits of Highly Effective People” by Stephen R. Covey into their curriculum. During the assembly, students presented the ways in which Hill’s life reflected these choices.

“[Hill] probably had never even heard of them, but we thought that we could take them and tie them into some areas of his life,” Jeffries said. “He had all of those skills even though he had never heard of [the book].”

Hill’s children, Peg and Mike Hill, and great-granddaughter, Morgan Jeffries attended the celebration. Students held signs indicating what good deeds their class had done and paraded across the gym.

Principal Betsy Smith reminded students to not only practice kindness during this season, but every day.

“Just because we accomplished 99 acts of kindness doesn’t mean that we’re done,” Smith said. “You are going to make a big difference if you are kind to people.”

In life, Hill served as the principal of Shelby County High School before becoming the superintendent of the Shelby County Schools system. EHES was built in 1978, originally called Columbiana Elementary School and was renamed for him in honor of his retirement.

Peg Hill said that her father’s faith came first, and that he worked hard every day.

NORTH SHELBY – Students at Hilltop Montessori School learned first-hand what it is like to be an archaeologist and presented... read more