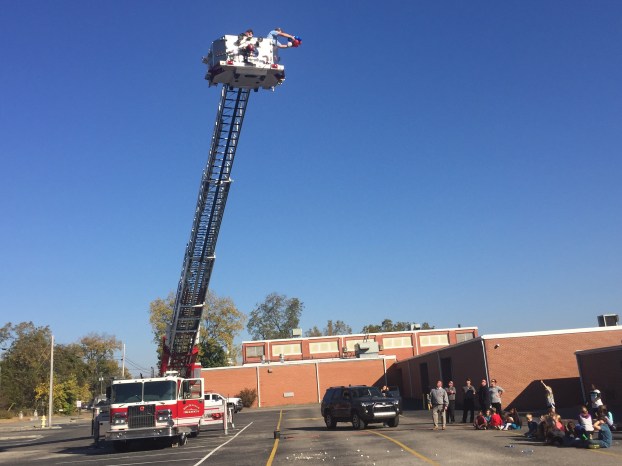 A firefighter prepares to drop a device made of balloons during Calera Intermediate's Egg Drop on Nov. 18. (Reporter photo/Briana Harris)

Third through fifth grade students were challenged to create a device that would protect a raw egg during a drop of about 60 feet.

Last year, the Calera Fire Department helped the school with the event by using their bucket truck to drop the devices, but this year Calera and Montevallo fire departments partnered to help with the event. Sav Mor Food Outlet in Calera donated the eggs.

Students loaded their devices into a crate on the ground and firefighters used a rope attached to the crate to pull the devices up. The devices were then dropped from the top of the ladder attached to the bucket truck.

“We like being involved in the schools,” Calera Fire Chief Sean Kendrick said. “We like to have a good relationship with the school system and the students. We want the students to be familiar with us, that way if there’s every an emergency they’re not afraid of us.”

Kendrick’s fourth grade daughter Mia participated in the Egg Drop, and her egg survived. Mia beamed with pride as she opened her device to find that her egg had not broken.

“She came up with the design all by herself,” Kendrick said. “We tried out about 10 different designs until it worked. We tested each one by throwing it off the deck at our house.”

Students were not allowed to use any packing materials, such as bubble wrap, to make their contraptions. Teacher and Egg Drop coordinator Lindsey Irvin said 120 students participated.

“They were encouraged to repurpose everyday items to make their devices,” Irvin said.

Students used everything from swimming pool noodles, plastic straws and utensils, soda bottles and milk jugs to protect the eggs, and cotton balls or tissue as cushion. Irvin said some students worked on the project in school, while others completed it at home with the help of their parents. Some parents attended the Egg Drop to support their child.