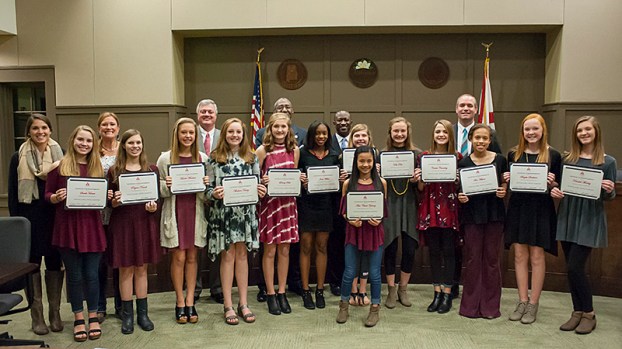 ALABASTER – The Thompson Middle School seventh-grade volleyball team earned the spotlight during a Nov. 29 Alabaster Board of Education meeting after the team wrapped up a season for the ages.

Shortly after winning the metro championship for the first time, the TMS seventh-grade volleyball teams received recognition for their achievements and certificates from School Board members and ACS Superintendent Dr. Wayne Vickers.

“What a wonderful group of young ladies. You represent our school system and our middle school so well, not just on the court but in the hallways of the school and in the community too,” Vickers told the team. “If you stick together and listen to your coaches and parents, you have an opportunity to win another championship. Only this one will be a blue map at Thompson High School.”

The TMS seventh-grade team is coached by Tonnie Glover, who said the girls excel on the court and in the classroom.

“Not one of our girls have had any issues with academics. They are some of the best girls I’ve been around,” Glover said. “They are not just champions in sports, they are champions at school. Let love lead you all the way, and it will carry you far.”

The team consists of the following girls: