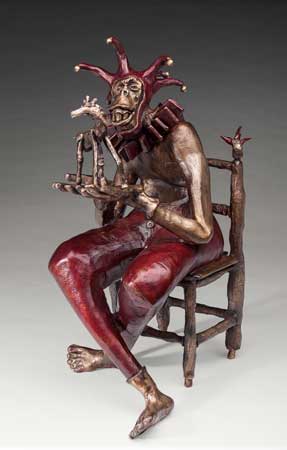 Each year, the annual gallery exhibit gathers the best local artists the area has to offer to compete for prizes.

This year over 100 pieces of artwork were submitted in categories of photography, painting, drawing, 3D design and multimedia. Grice took home the top prize.

Since childhood, Grice always had a knack for art and creativity. It wasn’t until art school that Grice found a love for sculpture.

Earning a Bachelor of Fine Art and later a Master of Art Education from the University of Montevallo, Grice has been sharing his passion for art with students since the mid-90s.

When creating a piece, Grice looks to his childhood for inspiration.

“Childhood is a time for most of unbridled imagination – whimsical dreams – multiple wonders,” says Grice. “Being a child and being free – free to dream, free to think and imagine.”

Grice’s childlike imagination often shows up in his work. His sculptures and paintings are best known for their whimsical and entertaining qualities.

Grice says that he also draws inspiration from childhood toys such as Legos or Lincoln Logs and the way they are pieced together to create an object.

He uses similar concepts when creating his sculptures. They are simply components pieced together to create a piece of his imagination.

“Everything is fresh and new each time I come into the studio,” says Grice. “I bring out my parts and just build.”

Grice used this concept when creating his award-winning piece. Storytime was truly a labor of love. Bronze sculpture is a labor intensive art form that can take months to make.

For Storytime, the piece was first created out of clay then a mold was made of the piece in order to cast it in bronze.

After the bronze is cast comes the task of cutting, grinding and polishing the piece, followed by selecting colors for the piece and heat treatments.

The last step is waxing the piece and giving it a final polish.

Storytime features a monkey dressed as a jester holding a small giraffe. The jester appears to be telling the viewer a story.

Grice says that monkeys and giraffes end up being a common theme in his work. No matter what, Grice’s work is always meticulously crafted, visually engaging and seems to have a story of its own to share.

When Grice isn’t busy teaching Ceramics and Sculpture at Hoover High School, he can be found in his studio creating new pieces.

His work was chosen Best in Show at the 2014 Magic City Art Connection, multiple corporations and museums have purchased his work for their collections and he has even been featured in Ceramic Monthly magazine.

Grice’s work can also be seen in galleries such as Andre Kohn Fine Art in Scottsdale, Ariz., and Mary Martin Fine Art in Charleston, S.C. and Naples, Fla.

It seems that Grice has no end of talent and imagination.

“My main theme is entertaining you and entertaining those who view my work,” says Grice. “I like to make people laugh. I like the idea that my sculpture will sit in your house and will entertain you for years to come.”

To see Grice’s work, visit his website at Nelsongriceart.com or follow him on Instagram @griceart. For more information on gallery exhibits and events at the Shelby County Arts Council visit Shelbycountyartscouncil.com or call 669-0044.