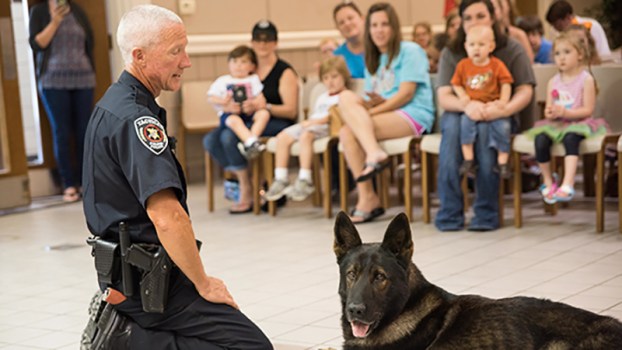 Helena Police Officer and K9 Handler Philip Richards tell children about the department’s 10-year-old German Sheppard K9 Bak on Wednesday, July 6 at the Helena summer reading program. Bak passed away from cancer on Nov. 29 and the department is currently looking for a new K9. (File)

HELENA–The Helena Police Department has lost a member of its family as the department’s K9 Bak passed away from cancer, the department announced in a statement on Nov. 29.

“It is with deep regret that we must share the passing of our loyal K9 Bak due to cancer,” the Facebook post read. “Bak and his handler, Officer Philip Richards dedicated the last 10 years to protecting the citizens of not only Helena, but Shelby County as he worked closely with neighboring agencies on a regular basis. They were both highly respected by law enforcement countywide and always represented Helena with professionalism and pride.”

Bak was a 10-year-old German Sheppard and served in a number of roles with the department including apprehension, search and recover and interacting with children.

In July, Richards and Bak visited Helena City Hall for the summer reading program as Bak interacted with children and showed off his skills.

“Bak was born in Czechoslovakia and then was trained in Holland,” Richards said in July at the summer reading program. “In some ways he is like your dog at home but Bak has been specially trained to do certain commands. He is a dual purpose dog, meaning he can apprehend or smell to search and find something we’re looking for.”

Helena Mayor Mark Hall, who works closely with all city departments and was the former Pelham Police Chief, said Bak was one of the best service dogs he had a chance to see.

“Bak was an impressive police service dog,” said Hall. “I had the opportunity to see police K9’s in action over the years and found Bak to be the best. This animal’s success is a direct result of the dedication and professionalism that his handler, Officer Phillip Richards instilled in Bak’s training, interaction and love he shared with this phenomenal animal everyday. We will miss Bak and he will be hard to replace.”

The HPD said Bak was loved by everyone and offered their condolences to Richards.

“He was loved not just by all of us, but by everyone who met him,” read the statement. “They both loved interacting with children at our schools and we know that he will be greatly missed by everyone. Our support remains with Officer Richards as he lays his longtime partner to rest. Thank you for your service and rest easy Bak. You have earned it.”

Lady Warriors use strong second half to defeat Helena