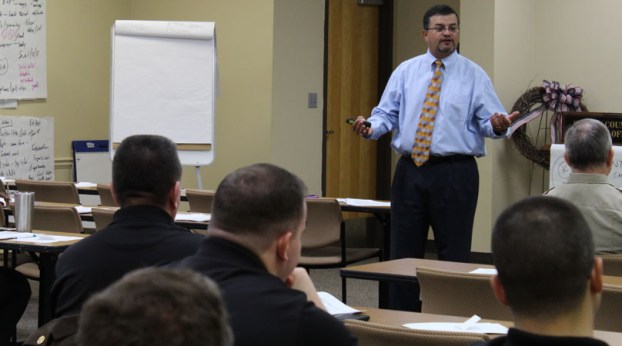 Diversity Training Group President and CEO Mauricio Velásquez speaks about topics related to diversity to officers from the Shelby County Sheriff’s office and other agencies. (Contributed)

COLUMBIANA – The Shelby County Sheriff’s Office held a week long training course to promote diversity and raise awareness about bias at the Sheriff’s Training Center from Monday, Nov. 28 to Friday, Dec. 2. All police officers from the Shelby County Sheriff’s Office were required to attend the sessions, and officers from local, state and federal agencies in Alabama were invited to attend during certain days.

Shelby County Sheriff John Samaniego said despite having no reported diversity issues in Shelby County, the course was still necessary.

Diversity Training Group President and CEO Mauricio Velásquez taught the course. Throughout the week, officers learned about conscious and unconscious biases, trust among coworkers, the meaning and importance of of diversity and how to address diversity issues. Velásquez also discussed how toxic attitudes from employees lower a team’s morale.

According to Velásquez, courses that cover topics like diversity and bias are especially necessary for those in law enforcement careers.

“More than any other profession, [law enforcement officers] are in the trenches. They’re in the middle of situations all the time,” Velásquez said. “You can either go in uneducated and naïve, or you can go in very aware and influence the outcomes.”

Velásquez also commended the Shelby County Sheriff’s Office for their proactive thinking, willingness to participate and transparency with other agencies and the media.

“The leadership here is progressive and forward thinking. They’re doing [the course] while they can and before something happens,” Velásquez said. “This has been a sheer joy and a pleasure. These officers have actively participated. They’re into it, and they care. This is one of the most progressive departments in the state of Alabama. These guys are awesome. They’re rock stars.”

Samaniego looks forward to seeing how the officers who attended will take what they learned and apply it to better serve their communities.

“I think we do an outstanding job, but there’s always room for improvement,” Samaniego said. “Everybody that goes through it will realize that they took something away that can help them in their career.”

Spirit of giving: Kids Christmas shop for their loved ones