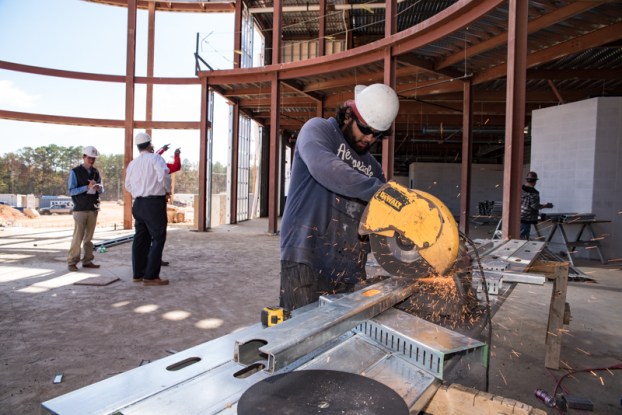 Crews work to construct a portion of Alabaster’s new high school building, which is being constructed between Thompson Road and Kent Dairy Road. The city’s School Board recently approved a bid for the school’s athletic facilities. (File)

ALABASTER – Crews soon will begin work on the new athletic facilities at Alabaster’s new high school, after the city’s Board of Education awarded an about $19.9 million bid to complete the project during a recent meeting.

School Board members voted unanimously during their Nov. 29 meeting to award a $19.87 million bid to the Wilsonville-based Clements Dean construction company to build fields and practice facilities for the school’s football, track, soccer, baseball, softball, golf and tennis teams.

About $1.9 million of the bid will be used to pave a road from the new school campus to Kent Dairy Road and to add parking around the new athletic facilities.

“The biggest thing is that all of our sports teams will be able to practice on-campus, which is not the case at the current school,” said Alabaster School Superintendent Dr. Wayne Vickers. “Our students deserve great facilities.”

Vickers said indoor teams, such as volleyball, wrestling, cheerleading and basketball, will have practice facilities in the school’s gyms, which were approved in a previous bid package.

“I’m excited for all of our kids who are going to be able to use these facilities,” said School Board President Adam Moseley. “All sports will be taken care of. For example, the soccer and track teams will be able to practice at the same time, which has been an issue at the current facilities.”

Once completed, the project will include a 5,400-seat stadium, soccer, baseball and softball practice facilities and fields. The project also will include tennis courts and a putting ring for the school’s tennis and golf teams, Vickers said.

“It’s a major upgrade from what we have now,” Moseley said. “We want our kids to have the same opportunities, or better, than anyone else around us.”

The athletic facility bid package marks the fourth and final major bid for the new high school, which is set to open to students in the fall.

When it is completed, the new school, which is being constructed between Thompson Road and Kent Dairy Road, will have room for more than 2,000 students, will have 103 instructional classrooms – 21 of which will be labs – a 1,070-seat auditorium, an 85-seat theater, a 32,269-square-foot career academy and a 50-seat lecture hall.

The campus will feature 1,790 parking spaces surrounding the building – primarily on the side and back of the main campus.

Fourth and fifth grade students at Chelsea Park Elementary School recognized the Lily of the Cahaba chapter of the Alabama... read more