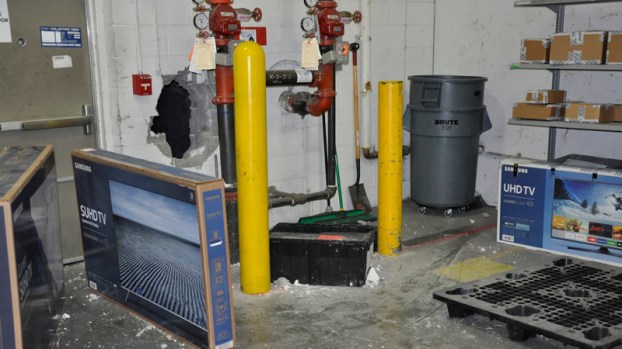 A hole in the wall can be seen from inside the Best Buy store off U.S. 280 where someone gained access to the store in an apparent burglary attempt. (CONTRIBUTED)

NORTH SHELBY – An apparent attempted burglary at the Best Buy store off U.S. 280 appears to have been unsuccessful.

A culprit gained entry to the story by busting a hole in a wall with an unknown tool, but Birmingham Police said an inventory conducted by the business has revealed no stolen items, according to Lt. Sean Edwards, public information officer for Birmingham Police Department.

At about 3:08 a.m. Nov. 28, an alarm at the store was activated but no call was made to police by the alarm company, according to detective’s notes provided by Edwards.

At about 3:56 a.m., a second alarm went off, and police were notified and arrived at the scene about four minutes later.

A search of the area produced no suspects. Also, surveillance video was little help because of a lack of light.

“It appeared that there was only one suspect that entered the business through the hole on the wall,” the detective’s notes read. “Security video from the surrounding area businesses has been negative so far; however there was a lot cleaning crew present in the area at the time of the burglary. Interviews with that crew will be conducted soon.”

One suspect, in Indiana, has been taken into custody in these incidents.

HOOVER – Preparedness was the focus of a meeting of the Hoover Area Chamber of Commerce Economic Development Committee... read more