HOOVER – A suspect in a Hoover shooting and vehicle theft on Dec. 8 has been arrested and charged with first-degree assault and first-degree robbery. 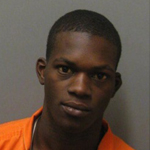 Alonzo Dundra Rawlinson, 19, of Montgomery is being held at Montgomery County Jail on bonds totaling $120,000, according to Hoover Police Department press releases.

The shooting victim and a friend on Dec. 8 drove to Montgomery, where they picked up two acquaintances with the intent of bringing them back to the Hoover area, according to the press releases.

After making a stop in Pelham, they continued into Hoover, where one of the acquaintances sitting in the back seat of the vehicle pulled a handgun and demanded property from the driver and his friend, the victim told police.

The victim pulled onto Southpark Drive, in front of InTown Suites and near the Hoover Public Safety Center, and the armed suspect shot the victim in the leg at about 7:12 p.m., according to the release.

A statewide “be on the lookout” was issued for the stolen vehicle, and it was recovered by Montgomery Police on Dec. 9.

Rawlinson was driving the vehicle when it was stopped, according to police.

Detectives from Montgomery contacted their Hoover counterparts, who met with the victim and identified Rawlinson as the person who shot him and stole his vehicle.

Warrants were obtained through the Shelby County District Attorney’s office.

He will be transferred to the Shelby County Jail when he posts bond on the receiving stolen property charge.

The second suspect is still at large. He is described as a black male in his 20s from the Montgomery area, according to police.