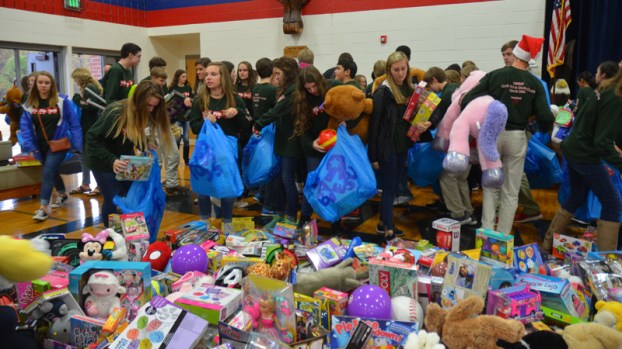 NORTH SHELBY – Every year since 1993, Oak Mountain Middle School has made an overwhelming contribution to the U.S. Marine Corps Reserve’s Toys for Tots program.

Toys for Tots collects new, unwrapped toys for distribution as Christmas gifts to less fortunate children in the community.

The OMMS community outdid itself again this year, as $21,054 was raised for the campaign.

The school’s National Junior Honors Society members visited Toys R Us in Hoover on Dec. 5 to purchase toys and then presented the toys to Toys for Tots at a school-wide assembly the same day.

“Once again, Oak Mountain Middle School students have surpassed the $20,000 goal for Toys for Tots,” school Principal Larry Haynes told those in attendance.

The amount raised represents about $13.60 per sixth grade student and $20 per student in grades 7-8.

Club President Victoria Simpson thanked all who contributed to the effort.

“Thanks to everyone’s hard work and willingness to give, hundreds of children in our area will wake up to gifts Christmas morning,” Simpson said. 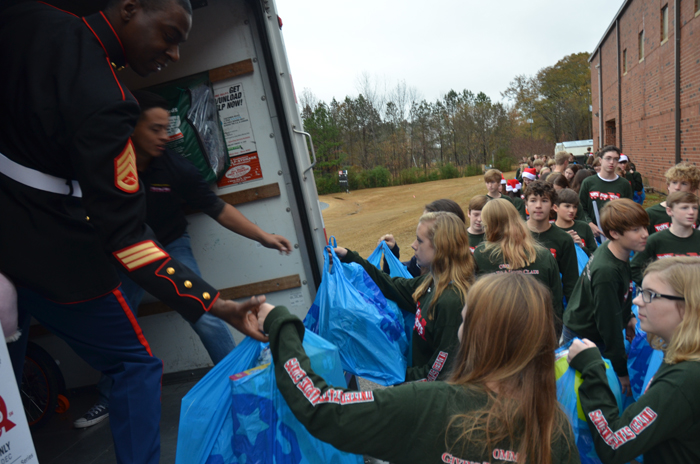 Tucker said distribution of the toys would be from Dec. 17-22 at various locations, with more than 8,000 children served in the local region, which includes Shelby, Jefferson, Bibb, St. Clair, Blount, Walker and Fayette counties.

“It’s extremely rewarding,” Tucker said about the effort. “I’d like to extend a heartfelt thank you to the school community and other supporters.”

Tucker said the donation from OMMS is one of the largest the region receives each year.

NJHS students helped load a 17-foot truck with the toys that were donated.

While the toys were being loaded, the remaining students at the assembly sang along to Christmas tunes played on the piano by teacher Jerry Bullock.

NJHS sponsor and OMMS teacher Lauren Gingras said members are chosen based on grades and service, among other factors. The students promote the Toys for Tots drive and encourage their classmates to participate.

Gingras said she thinks the project is worthwhile because children are taught that what they receive for Christmas is a reflection of their behavior.

“If they wake up and have nothing, what are they being told?” Gingras said.