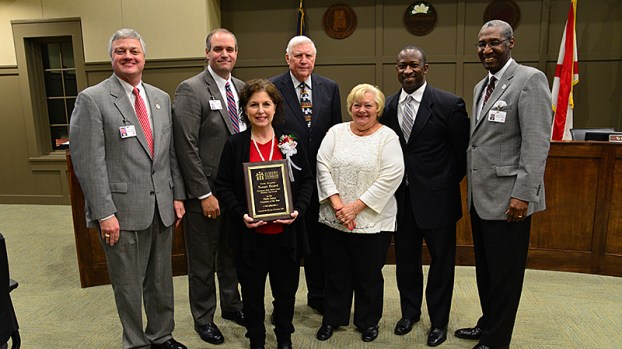 Thompson Sixth Grade Center counselor Susan Beard, third from left, is honored by Alabaster Board of Education members during a Dec. 12 meeting. Beard recently was named the Alabama Counselor of the Year. (Reporter Photo/Neal Wagner)

School Board honors state’s ‘Counselor of the Year’

ALABASTER – Several weeks after earning the spotlight at an Alabama School Counselors Association meeting, Thompson Sixth Grade Center counselor Susan Beard earned praise from her own Board of Education.

During a Dec. 12 meeting, the Alabaster Board of Education shined the spotlight on Beard for earning the state School Counselor Association’s Counselor of the Year award.

“This is a testament to Sue Beard and what an amazing school counselor she is,” Alabaster City Schools Student Services Coordinator Dorann Tanner said shortly before presenting Beard with a certificate of appreciation from the School Board.

The local honor came about a month after Beard was recognized for the Counselor of the Year award during a Nov. 17 Alabama School Counselor Association meeting.

Beard has been serving as counselor at TSGC since 2011, has been a school counselor for 12 years and has 24 years of experience as an educator. While this year marks her first statewide counseling award, she previously was named Counselor of the Year by Alabaster City Schools in 2015 and by the Shelby County School System in 2008 and 2009.

She holds a bachelor’s degree in English from the University of New Orleans, and has taught at a middle school in Louisiana and a high school in Georgia, where she “discovered her passion for counseling from helping one young man reach his goal of graduating, when he never believed he would,” according to the School Counselor Association.

“The same week he graduated, Susan enrolled in the master’s program, earning a master of education in counseling and guidance from Augusta State University in 1998,” Tanner said, reading Beard’s biography. “She has been happy in Alabama since 1999, and wakes up every day excited to head to school. She believes there is nothing more important than children, and each one needs to feel valued, safe and special.”

HOOVER – Hoover City Schools was ranked the fourth best school system in the state by Niche. Despite the high... read more