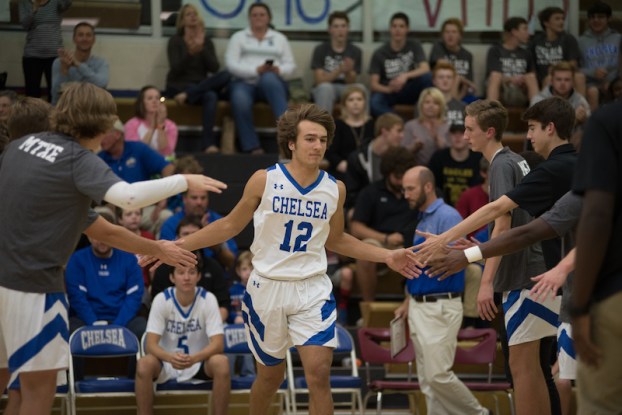 Chelsea senior Matthew Marquet led the Hornets with 14 points in the game on the way to a 76-42 route of Leeds. (File)

CHELSEA – Chelsea started the 2016-17 season about as hot as they could, winning their first four games to start 4-0. That quickly changed as they lost their next three in a row and four of their next five games. Well look out because the Hornets are back.

Winners of three consecutive games, Chelsea (8-4) has gone from average to looking like one of the best teams in Shelby County. They got that third win in a row after taking down the Leeds Greenwave in impressive fashion 76-42 on Tuesday, Dec. 13.

Leeds hasn’t had the best of seasons as they are extremely undersized and young, but they hung tough with the Hornets in the first quarter. Chelsea was only able to pull ahead 17-14 at the end of one. Hornets head coach Nick Baumbaugh wasn’t too happy with the way his defense performed in the opening quarter.

Adjustments were made and the defensive intensity was turned up in the secon. Chelsea came out and forced five turnovers in the quarter and outscored Leeds 17-5 in the quarter to garnish their first quarter lead and go up 34-19 at the half.

Not much changed coming out of the break except for the fact that the Hornets offense may have improved even more. They were able to put up 25 points in the third quarter to run away with the game.

Chelsea scored 17 more points in the final quarter to outscore the Greenwave 42-23 in the second half and win by the lopsided margin of 76-42. The offense was clicking on all cylinders for the Hornets in the win.

Hornets’ senior Matthew Marquet led Chelsea with 14 points in the game. Joseph Lanzi, the team’s leading scorer, added 10 points. Junior Tyler Coleman and senior Bailey Hix added 10 points apiece for Chelsea to give the Hornets four double-digit scorers in the game. Baumbaugh had to be impressed with his team’s effort and focus tonight with 11 different players scoring and the contributions they gave on both ends of the floor.

Chelsea is getting hot again at the right time with several big games coming up throughout the rest of December.