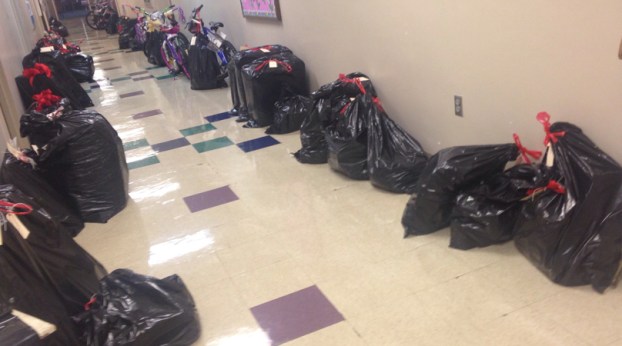 Columbiana United Methodist church is providing Christmas gifts for the families of children in need at Elvin Hill, Wilsonville and Shelby Elementary Schools through their “Skillet” Bird Christmas Fund.

“The schools identify he kids for us, and we raise money in he community for us to shop for each kid,” said Luther Fowler Bible Study Sunday School Class President Dan Hedrick.

According to Hedrick, church members are given money from the fund to buy toys for a specific child.

“We’ve evolved to where families are given a gift card to go and shop for the children whose names they have drawn,” said Luther Fowler Bible Study Sunday School teacher Evan Major.

Hedrick and Major said the gift cards each contain $100, but many families often spend their own money to provide a child with the gifts he or she asked for.

“Most likely, we’re going to end up spending more than the $100 and [using] personal money,” Hedrick said.

“That’s probably true of the majority of the people who shop for the children. I’d say about 90 percent do. I know me and my wife always do every year,” Major said. “We had an older boy, this year. There was something that he had requested and we made sure that he got it. I don’t know how much we went over, and it doesn’t matter.”

Hedrick said the “Skillet” Bird Christmas Fund has been a CUMC since George “Skillet” Milton Bird’s death over a decade ago.

“Mr. Bird has one of those stenographer pads that he used. He would go to the courthouse and to the Board of Education, up and down the streets of Columbiana,” Major said. “He did it, himself. When the church got involved in helping, it evolved over the years. [Bird] collected money until his death, and then our Sunday school class made it one of our projects.”

“Historically, that’s the way Mr. Bird did it. It’s basically the way we’ve always done it. That way, we’ve got the money in hand and we can make our plans,” Major said.

For this Christmas, CUMC has raised an estimated $12,000, and provided over 100 children with gifts.