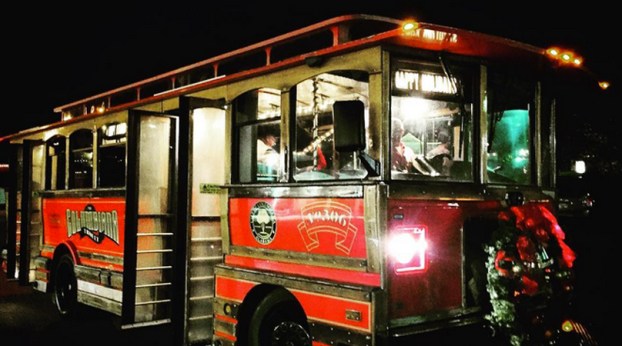 Residents and visitors boarded the trolley at the Senior Center. Tours began at 6 p.m. and 7 p.m. on Dec. 15-16. An additional tour was scheduled at 8 p.m. on Friday, Dec. 16 in order to give more people the chance to ride. (Contributed)

The city of Columbiana held their annual Lights of Columbiana Trolley Tour on the evenings of Dec. 15-16. Columbiana residents and visitors from surrounding areas met at the Columbiana Senior Center and ate cookies and drank homemade hot chocolate before boarding a trolley and exploring light displays around the city.

“We’ve had a lot of families from Columbiana, Calera and Chelsea. Columbiana is unique in that we have the trolley to begin with. Since we have the uniqueness of it, we’re able to tie it in with Christmas. People think it’s nostalgic to ride on the trolley and look at Christmas lights,” said Main Street Columbiana Executive Director Bragan Feldman.

Feldman said both residents and business owners along the designated routes were notified in advance and decorated their buildings for the tour. The tour was guided by Mayor Stancil Handley, who explained the history of older locations. However, newer homes and businesses were also featured.

“We have been doing that route for several years, so we sent out letters to those streets to let them know that we were doing the tour again this year,” Feldman said.

The trolley was boarded by guests at 6 p.m. and 7 p.m. on both nights. Feldman also said only a limited number could ride the trolley at a time. Because tickets sold out so quickly, an additional tour was scheduled at 8 p.m. on Friday night.

Those who participated in the tour were also able to vote on which house or business they thought was the best decorated.

“We let those who have ridden the trolley vote on heir favorite decorated Christmas house,” Feldman said. “We slow down a little bit, and the mayor is narrating as they go, so they know what houses they’re going by and what street they’re on. A lot of them just describe the house and we know which one they’re talking about.”

The house or business that received the most votes received a gift basket from Columbiana Main Street. This year’s winner was the house on 104 East Sterrett Street.

Feldman said the Lights of Columbiana Trolley tour was a family friendly event that helped residents and visitors get into the holiday spirit.

“I think it gives people a chance to do something during the holiday season as a family. You’re really appealing to that inner child at Christmas,” Feldman said.

A North Shelby County murder victim and her alleged killer had been friends and business partners for “many years,” Sheriff... read more