WILSONVILLE – Richard Marion Bassham, 47, of Wilsonville, was arrested Monday, Dec. 19, and charged with second-degree assault after he allegedly shot his friend after a fight on Sunday, Dec. 18, at about 10:30 p.m. 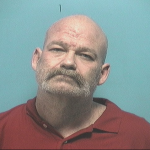 Shelby County Sheriff’s deputies responded to a residence in the 100 block of Valentine Circle to investigate a report of a person being shot. Upon arrival, deputies located an adult male who had been shot and had began to treat his injuries, which did not appear to be life threatening.

Deputies and Sheriff’s investigators determined that the victim had been in a fight with a friend immediately before the same friend then shot him, according to police reports. The victim was transported to a local hospital where he was treated and later released.

Bassham is being held in the Shelby County Jail and his bond is set at $10,000.

Anyone with information about this crime is urged to contact the Shelby County Sheriff’s Office directly at 669-4181, through the Secret Witness line at 669-9116 or by visiting ShelbySO.com.