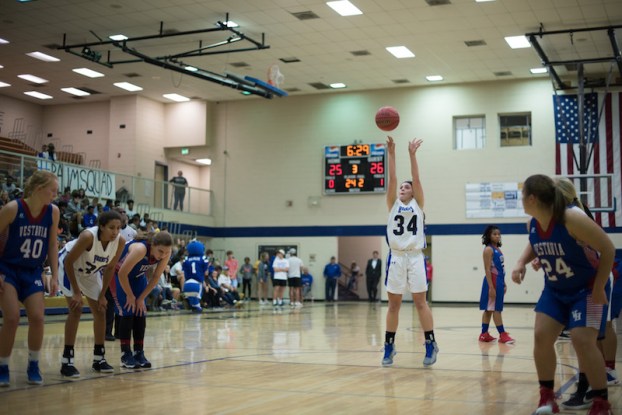 GADSDEN – Despite Michaella Edwards dropping 42 points and posting another double-double with 18 rebounds, the Lady Hornets fell on the road to Southside Gadsden 91-72 on Monday, Dec. 19.

The game was closely contested for the most part until a lopsided third quarter run did Chelsea in.

Chelsea was outscored 18-14 in the first quarter, but was easily still in striking distance and had no reason to panic just yet.

In the second quarter, the Hornets offense would catch up and post 22 points, but the story of the night was the lack of effort on the defensive end as they gave up 23 to the Panthers. The score was still close going into the half as Chelsea only trailed by five, 41-36, and was still very much in the game.

That changed in the third quarter, however, as Southside came out of the break ready to play, while the Hornets defense did not. The Panthers more than doubled Chelsea up outscoring them by 19 points as they went on a 31-12 run in the quarter and leap ahead 72-48. The Hornets couldn’t get any rhythm going on the offensive end as turnovers were key and ended up leading to easy transition baskets for Southside in the quarter.

Chelsea had an impressive fourth quarter putting up 24 points and holding the Panthers to 19 as they fought to the end, but the third quarter run by Southside was way too deep of a hole for the Hornets to climb out of.

Edwards led the way with her 42 points as she shot 12-26 from the field and an impressive 16-16 from the free throw line. Of her 18 rebounds, eight came off the offensive glass. She also added two assists and two steals.

No other Chelsea player scored more than seven points as the rest of the team combined for just 30 points. Allie Miller led the Hornets with six assists and five steals.

As a team they limited their turnovers to 27, which is still a lot, but an improvement from the way they have been playing. Earlier in the season, the Hornets were able to take down Southside 50-46 in a much better defensive effort, proving they are better than this game and their current slump shows. The loss marked sixth in Chelsea’s last eight contests after starting the season 5-0.