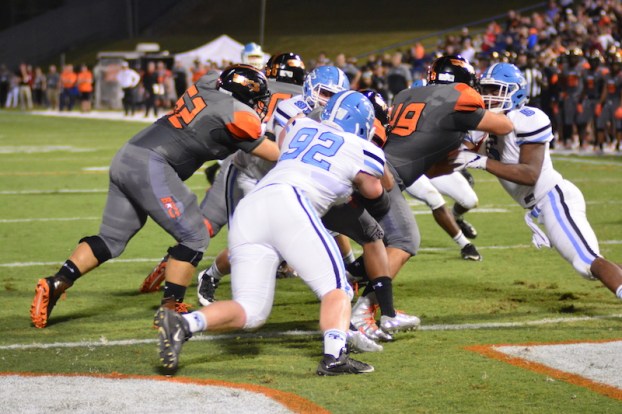 Douglas Henze is headed to Harvard after announcing he had committed to the Ivy League school on Twitter. (File)

Spain Park’s Douglas Henze announced Dec. 22 on Twitter, that he had committed to play football and attend Harvard University. The talented senior defensive lineman was a force for the Jags’ defense all season long.

In his time wearing the Spain Park blue and black, he saw the team go to the AHSAA State Championship and have some of its best success in the school’s young history.

He was tied for third in tackles with 36 on a Jaguar team that uses a lot of players, especially on the defensive side of the ball. He also added six tackles for loss and one sack to his stat line.

And judging from other Ivy League offers from Yale and Dartmouth, he clearly has the brains.

“I’m a very hard worker,” Henze said on his recruiting profile. “I always put in extra time in the weight room and on the field and work hard to maintain a high GPA.”

Pelham falls to No. 1 Mountain Brook

By ALEC ETHEREDGE | Sports Editor BIRMINGHAM – The Pelham Panthers found themselves in the semifinals of the Steel City... read more