HOOVER – Hoover Police are seeking the public’s help in identifying a man who allegedly stole two hover boards from the Walmart store off U.S. 280 on Dec. 13. 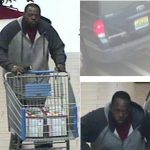 Store surveillance video captured these images of the man suspected of stealing merchandise from the Walmart off U.S. 280. (CONTRIBUTED)

According to a Hoover Police Department press release, the man placed two Razor hover boards in a shopping cart and went past the last point of sale without attempting to pay.

When Walmart staff approached him, the man ran out of the store and got into a blue or green late 1990s or early 2000s model Ford Expedition (Alabama tag 1BY6422) and left the scene.

HPD posted images captured by surveillance video onto social media, in hopes someone can help identify the man, who is wanted for questioning in the felony theft case.

The suspect is described as a black male, approximately 5’8” tall and 220 pounds with medium complexion.

The tag that was on the Expedition did not match the vehicle; it is actually registered to a 2004 blue Dodge Durango, which has been reported as stolen out of the Birmingham area.

Anyone who can identify the suspect, or who knows anything about him or this case, should contact Hoover Detective Courtney Pittman at 444-7614.

Anyone with information can also leave anonymous tips online at HooverPD.com/submit-a-tip.php.