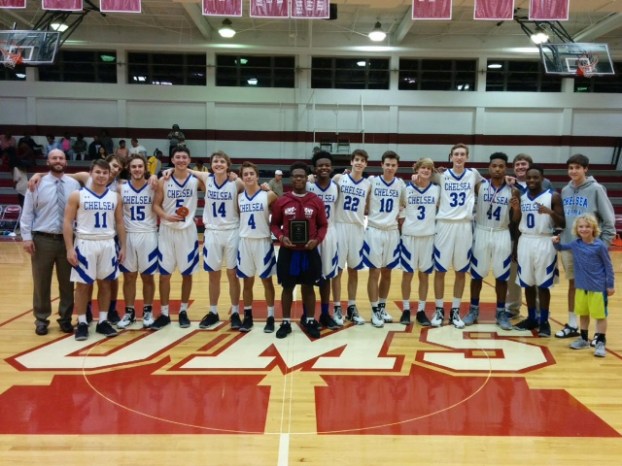 Chelsea won its 8th straight game in the championship game of the UMS-Wright Holiday tournament in Mobile on Thursday, Dec. 29. (Contributed)

MOBILE – Not much more can be said to describe the Chelsea Hornets right now besides one word, hot. The stingy Hornets have been swarming their opponents on the defensive end of the court over the past eight games and got through their three games at the UMS-Wright tournament with relative ease as they won their eighth consecutive game and the tournament championship over Monroe County 62-58 on Thursday, Dec. 29, in Mobile.

The Hornets (13-4) have been using a consistent team effort over that eight game winning streak, which continued to lead them in this matchup as 10 different Chelsea players scored.

Monroe County (11-2) started the game with the first push scoring the first four points to take a 4-0 lead, but Joseph Lanzi answered that quickly with a 3-pointer. Midway through the quarter Chelsea reeled off an 8-2 run to take a 16-8 lead. It looked like they had a chance to extend their lead, but after two turnovers in the closing minute of the quarter, Monroe cut the deficit to 16-12 through one quarter of play.

Each team started the second with a couple of baskets as the Hornets extended the lead to 22-16, but the Tigers were able to get some stops and go on a 7-0 run to take their first lead since it was 4-2 early in the game. The rest of the quarter was a back-and-forth battle as the two teams traded baskets and ended the half tied, 31-31.

Lanzi came out of the break determined to help his team win a championship scoring eight of the Hornets 13 points in the third quarter. The 13 points doesn’t jump off the page, but with Chelsea getting back to its swarming ways on the defensive side of the ball, those 13 points were enough to grab the lead as they held Monroe to nine third-quarter points. With it just being a four point, 44-40 lead, and the way the two teams were battling, the final frame was set up to be a down to the wire thriller.

Alabama A&M signee Deandre Robinson did everything he could to keep the Tigers in the game as they answered every run Chelsea tried to put together.

The Hornets led 59-52 with 30 seconds left, which seemed to be pretty comfortable at the time, but after Robinson knocked down a 3-pointer to trim that lead to just four, things got interesting. Lanzi was fouled on the ensuing Chelsea possession, but only made one of his two free throws. Robinson came down again and threw up another tightly contested three that found the bottom of the net to cut the lead to two at 60-58 with eight seconds to go.

Poise over the last few seconds helped preserve the Chelsea win as they ran time off the clock before a Monroe player eventually fouled Josh Gregg with 2.1 seconds left. Gregg calmly sank both free throws to seal the win for the Hornets at 62-58. It was a closely contested game as the Tigers gave Chelsea everything they could handle, but the Hornets team effort propelled them to victory in the end.

Lanzi had a game-high 22 points and was named as the tournament MVP. Josh Hanna was named to the All-Tournament Team and was a major factor with his eight rebounds and 11 points in the championship game. Robinson led Monroe County with 18 points and was also named to the All-Tournament team. Tyler Stallworth and Albert Middleton had 13 and 12 points, respectively for the Tigers to give them three double-digit scorers in the loss.

By Alec Etheredge | Sports Editor Mobile – After taking down host UMS-Wright in the UMS-Wright Christmas tournament on Tuesday... read more