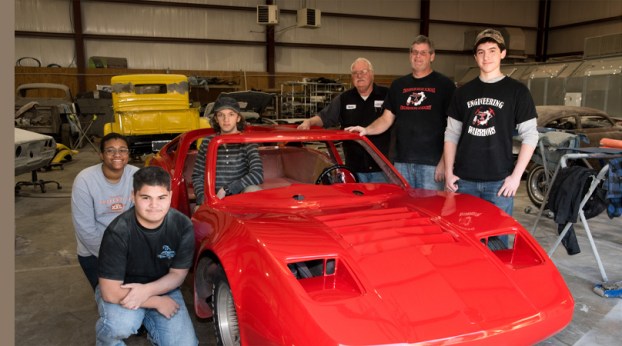 Students in the Thompson High School Engineering Academy are in the process of converting a 1970’s Bradley GT2 into an electric automobile. Teacher Brian Copes said this is the first time THS students have built a full-size electric vehicle.

“It had a Volkswagen engine in the back. The kids took it out and put in an electric motor,” Copes said. “In a sense, this is a new car. It shows what the students are able to do.”

Copes said students have put forth about 2,000 hours of work on this project, and the car only needs a few additional touches before its completion.

“It’s been painted, it’s been buffed and it’s ready for interior work,” Copes said. “Before we send it out for interior work, we still have to make splash shields for the back and a metal pan in the front that we need to build.”

Because the car has an electric motor, it does not require the use of gasoline.

According to Copes, it is important to expose engineering students to newer technology to better prepare them for the type of work they will be doing in the future.

“Electric cars are here, and they’re going to have a bigger presence in these kids’ lives,” Copes said. “Here, kids aren’t only learning body work, but they’re learning how to work on the newer, more advanced cars entering into the market.”

Copes said he expects it will be ready in time for the O’Reilly Auto Parts World of Wheels car show in Birmingham in mid-February.

According to Boyd, there are economic, environmental and performance-based benefits associated with electric cars. The only drawback is the distance the cars can go before needing to recharge.

“Performance on electric cars is far better than a gas car,” Boyd said. “However, the best one can go about 200 miles before you’ve got to plug it in.”

Boyd said this project is a rare opportunity that shows the capabilities of THS students and teachers.

“It says a lot that they get exposed to this kind of stuff. When I was in high school, we didn’t have anything like this to expose us to automobiles. Here, [Copes] is taking it a step further by exposing them to electric cars,” Boyd said. “I enjoy this. I’m having a lot of fun, and it keeps me young.”

Sophomore McKenzie Kimbrough knew nothing about building cars before getting involved with the THS Engineering Academy.

“Mr. Copes is a great teacher. He helps us all the time. I still don’t know everything but I’m learning a lot along the way.” Kimbrough said.

Because of her experience while helping to convert the vehicle, Kimbrough now plans to pursue a career in mechanical engineering.

“I went through the whole process. I’ve learned a lot, and I like doing this. It’s very fun and challenging. It’s given me a new perspective,” Kimbrough said.