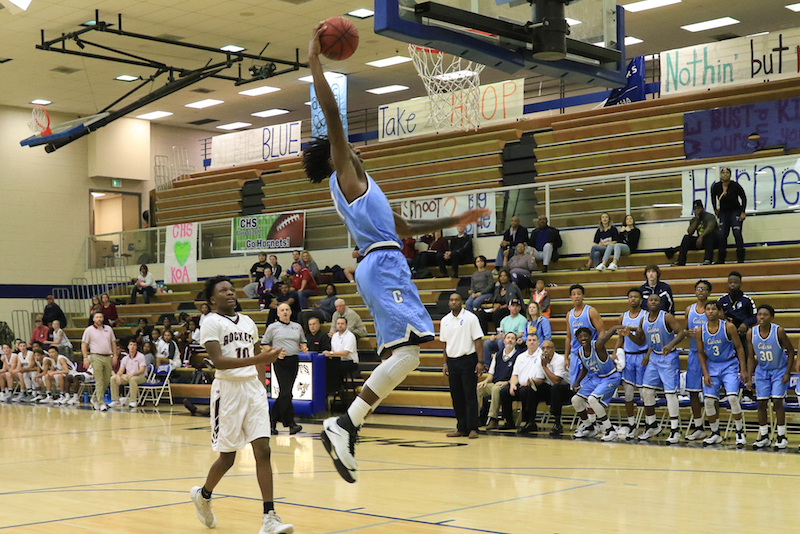 Calera’s Yatil Gant goes up for a dunk in the first round of the Jefferson-Shelby Hoops Classic. A total of 10 teams from Shelby County are competing in the inaugural event. (For the Reporter/Dawn Harrison)

The Jefferson-Shelby Hoops Classic tipped off on Monday, Jan. 2, at several different locations in Shelby and Jefferson Counties. Ten teams from Shelby County are participating in the tournament that continues through Friday, Jan. 6, and six of those teams got play under way in the opening round on Monday. Here is a recap of the first round action for those teams.

Vincent improved to 12-5 on the season after taking down Oak Grove 64-36 in the first round. Stephen Campbell led the Yellow Jackets with 23 points while Chris Hardie added 15.

The Hornets (14-4) got their ninth consecutive win in the first round after taking down Hueytown 58-47. The game was close throughout, but Joseph Lanzi scoring nine of his game-high 21 points in the fourth quarter helped Chelsea run away down the stretch. Sam Towery had 15 points in addition to Lanzi’s 21.

Shelby County lost a 62-52 closely contested game to Pleasant Grove in the first round.

The Lions lost their opening round game of the tournament to Mortimer Jordan.

Thompson fell to Minor in the opener, which pushed them to the loser’s bracket.

The Vincent Lady Jackets won their opener by holding Oak Grove to just 15 points in the game. Vincent used 46 points on the offensive end to route Oak Grove in the game and advance to the second round.

The Calera girls fell to 4-8 overall on the season after dropping their first game of the tournament to the Gardendale Rockets. The important thing for the Lady Eagles is that they still boast a 3-0 record in area play.

The Lady Hornets (9-8) used a 32 point first half to jump out in front of Hueytown and they never looked back as they went on to win 56-34 behind 26 points from Michaella Edwards and 18 from Allie Miller. Edwards also grabbed 12 rebounds for a double-double effort, while Miller shot an impressive 62 percent from the field.

The Lady Warriors (11-5) took down Minor 51-42 in the opening round as they brought in the new year right where they left off, with another win. Niya Oden led the way for Thomspson with 15 points while shooting 100 percent from the free throw line. The Warriors forced 21 turnovers in the game.

Pelham fell 55-22 to Clay-Chalkville in the first round.

Jefferson-Shelby Classic tips off next week