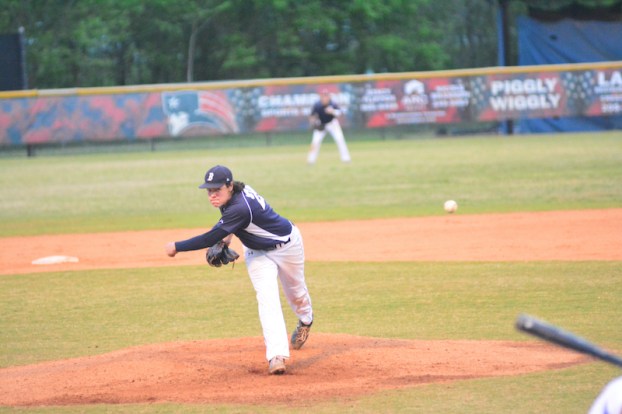 Heading into the 2017 season, the Briarwood Christian Lions will rely heavily on the arm and bat of Sam Strickland. (File)

NORTH SHELBY – For the first time in Steve Renfroe’s tenure at Briarwood, the Lions failed to advance out of the first round of the baseball playoffs last spring, falling to Oxford in the first round of the 6A postseason in two games, 6-0, 6-2. The Lions were still largely successful in 2016, as has been the custom under Renfroe, finishing 21-11, but nonetheless saw their season end earlier than they had hoped. Now, heading into 2017 with a strong returning cast set to step onto the diamond, the Lions are in good position to return to their traditional form.

“We had four seniors last year,” Renfroe said. “That was a small class, we had some younger guys playing. They’ve got some more experience now; we’re excited for this year. We’ve got a great group of seniors, we’re looking real forward to it.”

Renfroe, a baseball lifer, was an exceptional outfielder in his own right before stepping into the coaching side of the game. Picked in the sixth round of the 1976 MLB draft by the Cincinnati Reds out of high school, Renfroe decided to attend Auburn University instead of enlist in the minors, with the hopes of increasing his draft stock. Injuries however derailed his career shortly after, and he transitioned into the coaching ranks. When looking at the differences between coaching the college game and the high school game, he doesn’t see much of a distinction between the two.

“For us, we just teach baseball,” Renfroe said. “The biggest difference (between college and high school) is there, that’s all I did for 12 months out of the year. It was every day working in the cages from 7 a.m. until one o’clock then practice until six or seven at night. But it’s still baseball, it’s the same game, and I love it. Love teaching it. I just wish we had more time with them.”

On the field in 2017, Briarwood returns its top two aces in Logan Whittlesey and Sam Strickland.  A season ago as juniors, Whittlesey started nine games, pitched 52 innings and went 5-4 with an ERA of 1.08, one of the lowest in the county for pitchers with that much work. Strickland by comparison threw 44.2 innings over nine starts, struck out 68 batters and finished with an ERA of 2.04. Combined, the two pitched nearly half of all Briarwood innings last season, and will lead the way from the mound this spring.

“They were our one-two guys last year,” Renfroe said. “They’re both back, which is exciting. Both have experience, they’re used to it. That’s our starting point this year.”

One of the largest concerns heading into 2016 for the Lions centered around finding enough offensive firepower to win games, as much of the 2015 team that went 25-9 had graduated. In 2016 however, the Lions averaged more than seven runs per game over the course of the season, and have a number of big bats returning, chief among those will be Strickland.

“He can really swing the bat,” Renfroe said. “He’s a great hitter and he’s had a great offseason.”

The Samford commit hit .456 as a junior on 103 plate appearances to go along with 29 RBIs and four home runs en route to being named a First Team All-County performer. Carson Eddy, a junior, hit .324 a season ago while senior Cole Steadman hit .374. Those three, along with Kolby Kwarcinski, Will Baumbaugh and Whittlesey, will be expected to provide Briarwood with the majority of their offense.

The Lions are dropping back down into 5A ball this season after a brief, two-year stint in the 6A ranks. Briarwood will be thrown into 5A Area 8 alongside Shelby County, Sylacauga and Moody, and will enter the season as one of the favorites to take the area crown.

When discussing his expectations for the upcoming season, or any season, Renfroe’s approach has remained the same for years.

“Our philosophy has always been just to play the game of baseball, it’ll beat you before the opponent will,” Renfroe said. “If you’re solid and can catch it and throw it and throw strikes you’ll have a chance. We expect to compete against the best, and if we play the way we can play and play well, we’ll be playing deep into the postseason.”