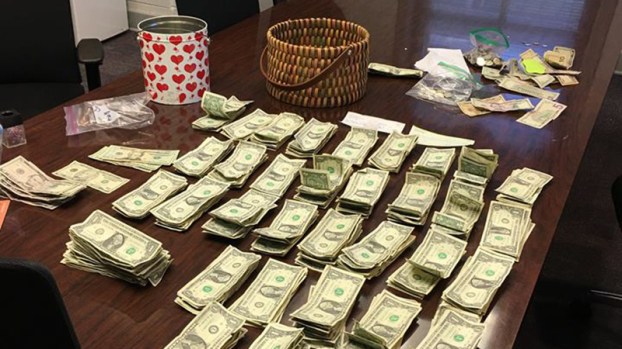 Helena Intermediate School administrators, teachers, students and parents collectively raised $940.13 for HPD and the purchase of a new K9 by participating in a hat day on Jan. 9. (Contributed)

HELENA–Helena Intermediate School administrators, teachers, students and parents decided to put their heads together, so to speak, to help out the Helena Police Department in finding a new K9 companion by holding a hat day fundraiser that resulted in nearly $1,000 raised for HPD.

The department’s 10-year-old K9 Bak passed away from cancer rather suddenly near the end of November 2016 and while he certainly will not be forgotten for all his hard work, the department still needs to find a replacement K9 for the future.

Unfortunately, there is a hefty price to pay when searching for a well-trained police K9 and because of this, a Helena resident decided to step up and help the department in the form of a GoFundMe fundraiser, at the beginning of January.

“About a month ago I shared the story of Bak passing away and my cousin said ‘you ought to start a fundraiser,’” Helena resident Chris Williamson said. “I called Chief (Folmar) to make sure it was OK and he said it was. So far, $1,500 has been raised with $800 being raised in the first fundraiser and then a lot of people went straight to the police department to give donations.”

After hearing word of the fundraiser, Helena Intermediate School decided to help out with the cause on Monday, Jan. 9, by acting on the school motto “Be the Difference.”

Helena Intermediate School students were allowed to wear hats to school on Jan. 9 by each paying $1 and teachers were also allowed to wear jeans to school in exchange for a $1 donation. All of the money collected from the hat and jeans day went directly to the Helena Police Department to help fund a replacement K9.

The late HPD K9 Bak was well known for being a popular figure within Helena schools, as well as the Helena summer reading program.

“He was very good with the community and in the schools,” Helena Police Chief Pete Folmar said. “Bak was very good at finding narcotics and tracking people and that’s primarily a credit to Officer Philip Richards. To keep a dog that sharp for that long is a reflection on the dedication and hard work of the handler.”

Collectively, the Helena administrators, teachers, students and parents raised $940.13 for HPD and the purchase of a new K9.

Those wishing to donate can do so by visiting the Gofundme page at Gofundme.com/k9forHelenapd or a donation can be made directly to the department to Captain Penhale.