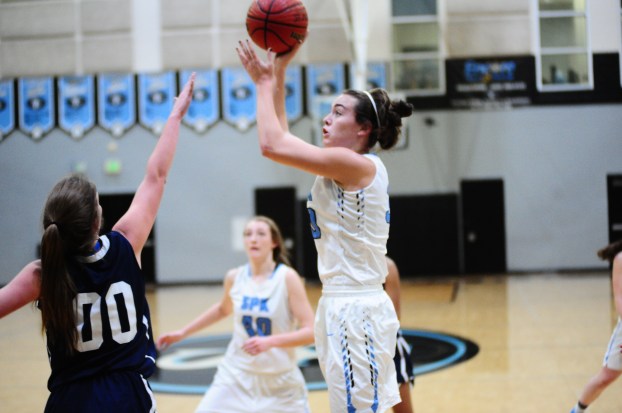 Barrett Herring led all scorers with 15 points in the win over the eagles, 10 of which came in the first half. (Reporter photo/Alec Etheredge)

HOOVER – The Oak Mountain Lady Eagles and Spain Park Lady Jags faced off in a big Class 7A Area 6 matchup on Tuesday, Jan. 10. Spain Park’s defense showed up and led the Lady Jags to a 1-0 start in the tough area as they took down the Eagles 56-26. Oak Mountain was without leading scorer Jacoby Sims in the game, which severely crippled their offense.

“The way we do our area, the next three weeks our Tuesdays and Fridays are big area matchups so if you aren’t playing good, you can lose the area in a short span, so it’s good to get off to a good start,” Lady Jags head coach Mike Chase said of the 1-0 start in area play.

Early in the game it was Spain Park’s full-court press affecting Oak Mountain (10-6, 0-1) as they forced several turnovers, almost all of which led to points. The turnovers wouldn’t have mattered had the Lady Jags not been able to knock down their shots which they did with ease. Spain Park used their hot shooting and great defense to jump out to a 25-11 lead in the first quarter.

“We haven’t pressed much this year, but we do it with our JV and middle school kids and just wanted to force a little tempo that we haven’t and it worked for us pretty well,” Chase said. “It just led to some really easy baskets for us tonight.”

Spain Park (12-7, 1-0) made 11 first-quarter field goals as five different Lady Jags scored in the frame. To put into perspective of how dominant that was, the Lady Eagles only made six total field goals in the entire first half.

The Jags continued to force the issue in the second quarter as most of their points in the game had come off of turnovers. Oak Mountain settled in a little bit midway through the quarter, but the Eagles were never able to cut into the deficit as they trailed by 15 the majority of the quarter and went into the half down 38-21.

It was much more of a defensive quarter as the Jags scored less than half of what they did in the first, and the Eagles continued to turn the ball over. Spain Park had two double-figure scorers in the first half as Barrett Herring and Claire Holt each had 10 for the Jags.

“It was great to see the success we had in the first half with the press,” Chase said. “I feel like we can continue to use it in spots the second half of the season, probably not as much as tonight, but I have confidence in it now.”

Spain Park stayed on track coming out of the break as they started the third on a 7-0 run, four of which were scored by Herring down low. The Lady Jags continued this trend the remainder of the quarter as Herring played big down low and the defense made life tough for the Eagles. In the first 7:40 of the quarter Spain Park had gone on a 16-1 run to take a 54-22 lead before Oak Mountain made a basket with 20 seconds remaining.

In the quarter, the Jags outscored the Eagles 17-3 and had all but sealed the game up. The fourth brought little excitement as both teams combined to score a whopping total of three points, which led to the 56-26 final.

Nine players scored in all for Spain Park as they were led by Herring with 15 and Holt with 10. With no Sims in the lineup, Oak Mountain failed to have a double-digit scorer.

“We’ve been gearing to try and get to this point,” Chase said. “They understand that their post season is relegated to these next six games.”