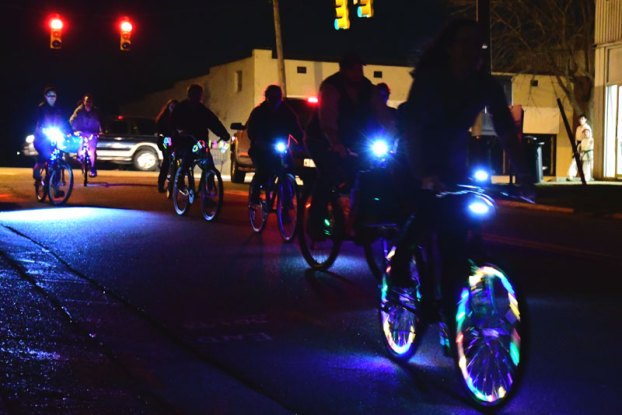 ValloCycle members rode through the streets of Montevallo on Jan. 11 with glowing lights attached to their bicycles.(Photo by Steven Calhoun)

The ValloCycle bike-sharing program held a glow ride through Montevallo on Jan. 11.

Bicyclers met up in front of Montevallo on Main with bright, colorful lights on the handlebars and around the rims of their bicycle tires.

According to board chair Arthur Herbert, the rides are to raise awareness of the program.

“We’re trying to get more excitement about people riding bikes. That’s kind of the idea, is to develop a community here in town,” Herbert said.

The crew took off around 7 p.m. and rode down Main Street, turning off at Shelby and going through Orr Park before completing the 40-minute ride.

Caplow praised biking as being cheaper and “the laziest form of transportation.”

Herbert said, “It’s really cool. You’re perceived as being cool if you ride a bike. This is the most efficient form of transportation moved by a person.”

ValloCycle was the first citywide bike-share in the state of Alabama, according to Herbert. Its membership is $20 per term. The terms are spring, summer and fall and they line up with the college’s semesters, according to Caplow.

“Our big picture goal is that we want to have more bicycles in Montevallo. We want more cyclists and we want to have more of a bicycling culture here,” Caplow said. “There’s quite a lot of people that live and work in this town, and bicycles are a convenient way to get around. The more bikes we have out there, the more normalized it is and the safer people feel riding bikes.”

ValloCycle plans to host more monthly bike rides and alternate between night and day rides. To learn more about ValloCycle, visit its Facebook page or go to cityofmontevallo.com/275/ValloCycle.