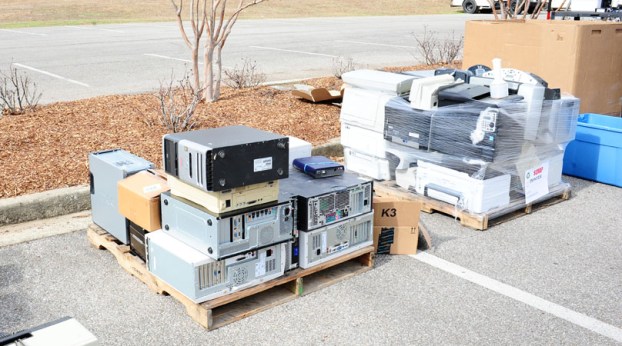 The city of Chelsea held its second annual Electronic Recycling Day from 9 a.m. to 2 p.m. on Saturday, Jan. 14 in front of Chelsea City Hall.

“Anybody can pull up with their old electronics, and we recycle them,” said Advanced Technology Recycling Administrator and Compliance Coordinator Morgan Hightower.

“We see a lot of electronics that end up in the city dump or landfills, and this allows the community to give their electronics to a responsible recycler,” Holland said. “They’re taking steps to protect their community from materials that could be harmful to the environment.”

E-Day was originally scheduled for Saturday, Jan. 7, but was rescheduled due to inclement weather. However, Holland said he did not think it affected the amount of people who participated.

Several residents expressed their appreciation for the opportunity to recycle their old gadgets.

“Unfortunately, a lot of electronics don’t last as long as they should. It’s difficult to go and throw them into the dumpster and not have parts recycled.” Chelsea resident Craig DuBois said. “It’s a good cause, and it’s a good alternative to putting it in the dump. I don’t think many cities offer this.”

Because of the way certain items are recycled, kitchen appliances, light bulbs, lab and hospital equipment, biohazards and items containing mercury were not accepted.

Small fees were charged to residents who recycled televisions, hard drives and glass. All other electronic devices were accepted for free.

ATR collected a total of 3,309 pounds of electronic equipment through E-Day.

Holland said this year’s E-Day seemed to be well received by Chelsea residents, and he looks forward to helping with E-Day in the future.

“Most people are receptive to the idea of getting rid of their old electronics that are laying around the house, causing clutter and taking up space,” Holland said. “This is the second year that the city has done it, and it seems to be growing. Hopefully, it will continue to grow.”

By ALEC ETHEREDGE | Sports Editor Dabo Swinney is coming off of his first National Championship win as a head... read more