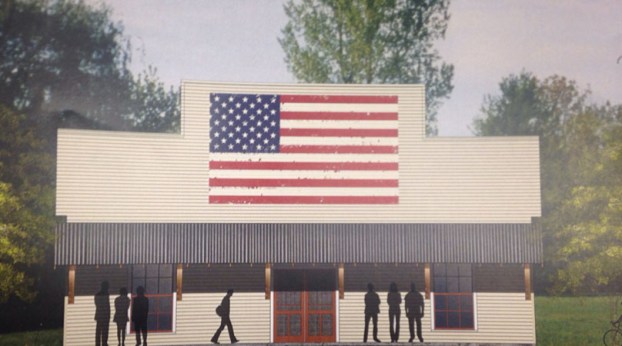 Pictured is a rendering of the Chelsea Pavilion, which will incorporate material from the original Weldon building on Shelby County 47. (Contributed)

The city of Chelsea authorized plans to dismantle and remove the Weldon building from its spot on Shelby County 47 at a regularly scheduled city council meeting on Tuesday, Jan. 17.

“My desire has been, all along, to try and honor the history of this building,” Mayor Tony Picklesimer said.

Picklesimer said a new building, known as the Weldon Pavilion, will be built using materials salvaged from the old Weldon building.

“We’ll be using those red front doors, and we’ll be using the windows,” Picklesimer said. “The façade of the store will also be used and constructed in the same way it has been.”

According to Picklesimer, the building will be built at “the most beautiful point on the lake” near the Chelsea Sports Complex, and will serve as a place for residents to host parties, reunions and other events.

The new building will have restrooms on each side, storage areas, outdoor grilling patios and a walking trail that leads to both phases of the athletic complex.

Picklesimer said the construction date for the Weldon Pavilion has not been set, because it will built as part of the second phase of construction for the Chelsea Sports Complex. All of the materials salvaged from the original Weldon building will be preserved in the meantime.

The city will sign a contract with Clements Dean Building Company to dismantle the building.

The city also recognized Chelsea resident Judy Galamore for her efforts to preserve the Weldon building. Galamore is the granddaughter of the building’s original owner, and recently started a petition to urge the city to restore the building.

“I think it’s very special whenever a citizen takes on a project that affects all of us,” Picklesimer said. “She has worked diligently, and she remembers being in [the building] every day as a child. Having her blessing is a big thing.”

“I’m happy. I knew it would probably turn out to be a compromise. This will still keep the history alive, and I’m very proud,” Galamore said. “This is much better than it falling down or being burnt up.”

Galamore said she looks forward to seeing how the new building serves the community while reflecting Chelsea’s history.