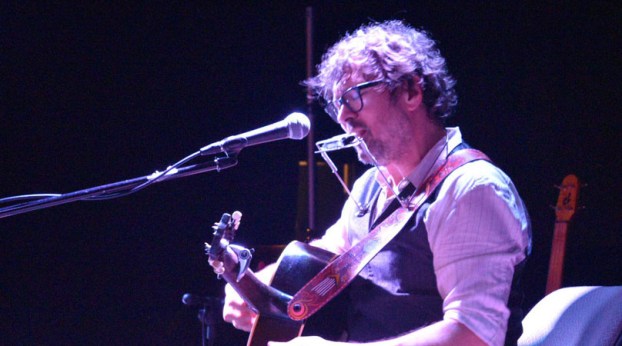 Will Kimbrough, 2Blu perform at SCAC

Will Kimbrough performed at the Shelby County Arts Council’s Black Box Theatre on Saturday, Jan. 21 at 7:30 p.m. Kimbrough is an Americana singer, songwriter, guitarist and producer who is based in Nashville.

“I’ve been a musician my whole life. Since I’m from Alabama, I grew up listening to my parents Hank Williams records along with my records,” Kimbrough said. “I’m a singer-songwriter who comes from the south, so my music is influenced by blues, gospel, country and rock ‘n’ roll.

According to Shelby County Arts Council Office Manager Sandra Annonio, this is the second time that Kimbrough has performed in the Black Box Theatre.

“He was coming through town, and he called us and said that he loves the venue, loves the people and just wanted to come back and play for us,” Annonio said.

Annonio said Kimbrough has previously worked with Jimmy Buffett and Emmylou Harris. Recently, one of his songs was featured in the television show “Nashville.” He is also part of an Americana band known as Willie Sugar Caps.

“It blows us away. When he called and said he wanted to come play for us again, we knew we were doing something right,” Annonio said.

Alabaster resident Alethea Gilmore said she is a fan of Kimbrough’s, and she was excited to learn that Kimbrough would be performing nearby.

“We go to see him every time he’s in Birmingham,” Gilmore said. “This is terrific. I’m really proud of Shelby County. I couldn’t believe they brought Will Kimbrough here.

“I’ve been a musician my whole life. This all started when I could never find what I liked in the store, so I decided to build my own,” Dudley said. “I will not finish anything unless it sounds ridiculously good. They’re in the hands of some pretty monster players,”

Refreshments were provided by SCAC. Several guests said they enjoyed the show and look forward to attending similar events in the future.

“We’re always looking for places to go where you can have good music at a reasonable price. You can’t beat this,” Gilmore said. “The venue is up close and personal. We’ll be back.”

Woman suspected of stealing from cars at daycares

NORTH SHELBY – A woman suspected of stealing from a vehicle at a daycare off U.S. 280 in December could... read more