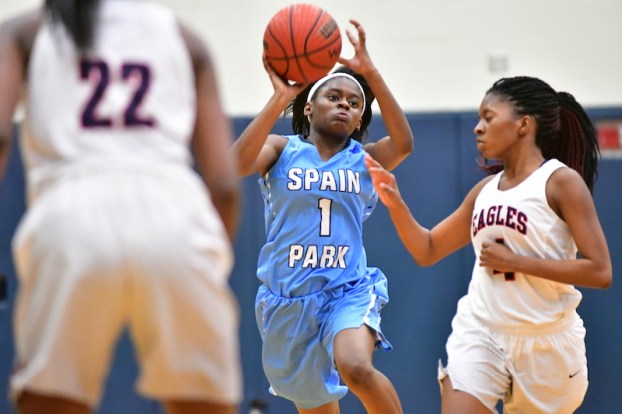 Ahrielle Parks has come on strong as of late and led the Lady Jags yet again with 20 points in an area clinching in over Huffman on Tuesday, Jan. 24. (For the Reporter/Ted Melton)

HUFFMAN – Spain Park’s boys and girls basketball teams traveled to Huffman on Tuesday, Jan. 24, to take on Huffman in a big area matchup. The Lady Jags had an opportunity to clinch Class 7A Area 6 with a win, while the guys looked to stay ahead of the curve in the most strenuous area of boys basketball in the state.

The girls have established themselves as the best team in that area after taking down all three of their opponents comfortably by an average of 25.25 points per game and that trend continued on Tuesday night as they beat the Vikings with relative ease, 61-35.

In their last game against Mountain Brook it was Ahrielle Parks paving the way for the Jags (16-8, 5-0), with Claire Holt also lending a hand. It was much of the same in this one as Parks led Spain Park with 20 points and Holt added 16 in the game.

The Lady Vikings came out of the gate hitting baskets quickly to go on a nice little 8-0 run, but that’s all it took for head coach Mike Chase and his team to make some adjustments. From that point on it was all Jags.

Spain Park ended the half on a 30-8 run as they clicked on all cylinders and locked up a strong defensive effort to take a 30-16 lead into the half.

That’s all the cushion the Jags needed in the game as they didn’t look back the rest of the way. They outscored Huffman 31-19 in the second half, which included holding the Vikings to just six fourth-quarter points.

It was a strong performance for clearly the most dominant team in Area 6. Anything can happen come area tournament time, but I fully expect the host Jaguars to not only win the tournament, but make a run in the playoffs.

Boys come up short, fall to 4-1 in area play

Spain Park’s boys didn’t have the same fortune as the girls. They came into the game with a 10-11 overall record, but held an impressive 4-0 record in area play after upsetting No. 3 Huffman and No. 1 Mountain Brook in back-to-back games.

The first go around against Huffman, the Jags were able to hold on late for a 52-48 win after controlling the majority of the game, but Spain Park wasn’t quite as fortunate in the rematch.

It was a very interesting game of up and downs that started with a 7-0 run by Spain Park in the first quarter. The Vikings answered very quickly by ending the quarter on a 16-8 run to take a one-point lead into the second.

It looked like we were in for a shootout, but the problem with that synopsis was that no shots fell in the second quarter. When I say no shots fell, I mean both teams were colder than an Arctic tundra. Huffman outscored the Jags 4-3 in the quarter and took a 20-18 halftime lead.

In the fourth that changed, however, and all things were back to normal – for one team that is. The Vikings went on a 14-3 run to start the quarter bringing Spain Park’s point total in the second and third quarter to a combined six, until Jamal Johnson had enough.

Over the last four minutes of the third quarter the Jags offense finally woke back up and went on a tear. Johnson hit three straight 3-pointers at one point and helped Spain Park claw back into the game scoring 18 points in a four-minute stretch of the game. After three quarters, the Jags had gotten back to within six at 45-39.

Huffman answered Spain Park’s late third quarter run with an early run in the final frame. The Vikings started on a 10-0 run to go up 55-39 and that deficit was too much for the Jags to overcome as they fell 70-53 in the contest.

The offensive struggles in the second quarter and early in the third did Spain Park in.

Johnson did all he could to keep his team in it dropping a game-high 32 points in the game. Huffman was led by 23 points from Travarus Carroll. Myreon Jones added 16 to help pace the Vikings.

The loss moved Spain Park to 10-12 overall and 4-1 in the area and sets up a huge winner takes all matchup with Mountain Brook on Friday night. The winner of the game will win the regular season championship and host the area tournament in a couple of weeks.

Da’Shaunte Smith not only had a game-high 25 points, but nearly had a quadruple-double in the game. (Reporter Photo/Keith McCoy)... read more