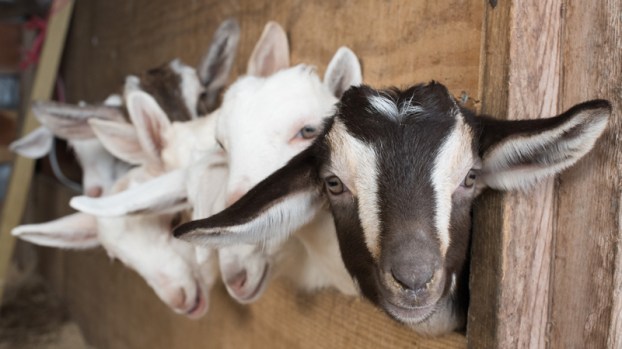 Hundreds of baby goats are being born at Stone Hollow Farmstead in Harpersville. The goats will one day help produce the farm’s famous goat cheese. (REPORTER PHOTO/KEITH MCCOY)

HARPERSVILLE – January is the time for kids at Stone Hollow Farmstead in Harpersville.

School children will visit the farm later in the year, but for now the farm belongs to hundreds of baby goats, called “kids,” which are bottle fed for now but will one day help produce the farm’s famous goat cheese.

Alexandra Stone with Stone Hollow said baby goats start appearing “like popcorn” around New Year’s Day each year, and the birthing season lasts for two or three months, with each mother goat having one to three kids.

Stone Hollow Farm was founded in 1999 by Alexandra’s mother, Deborah Stone, who had spent more than 30 years in the aesthetic, cosmetic and medi-spa industries but wanted to honor her parents’ and her grandparents’ heritage.

“She grew up on a farm, and then she moved to the city,” Alexandra Stone said about her mother. “I was 9 at the time [the family began operating the farm] and riding horses. I loved it too.”

Originally a breed farm for horses, the Stone family decided to try goats.

“We bought five goats not knowing a thing about goats and how much milk they would produce,” Stone said.

When the goats produced more milk than was needed at the farm, Deborah Stone made goat cheese for friends.

“There is nothing she can’t do,” Alexandra Stone said.

The farmstead now has about 250 milking goats and two bucks, or male goats.

There are three kinds of goats: Nubians, Alpines and Saanens. The Saanens provide the cheese volume, while the others have a higher content of butter fat.

Goats are milked about nine months a year.

Stone Hollow offers 12 flavors of cheeses marinated in a Mediterranean method. Rose petal jam, for example, is placed at the bottom of a jar with cheese on top. Then, the cheese is covered with oil, which melds the flavors.

In addition to goats, turkeys, chickens, ducks, cows, horses and a pig can be found at the farm, which covers 80 acres.

Most of the Stone Hollow products—including jams and jellies, pickles, juices, gift boxes, flowers, vegetables and more—are available at The Pantry, located at 17 Dexter Avenue, Birmingham.

“Everything is made on the farm with products from the farm,” Alexandra Stone said.

Distinguished Young Woman of Alabama looks back on state program