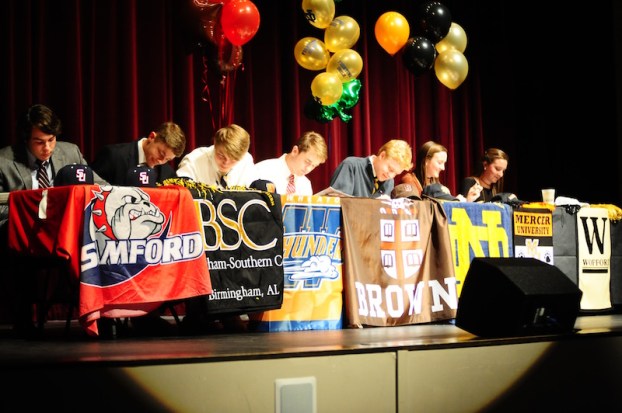 “These young men and women have done something pretty special to be here today,” Briarwood head football coach Fred Yancey to open the ceremony. “This is the beginning of a trail and we want to celebrate with them.”

Strickland, Core and Stedham are all impressive baseball players and all three signed scholarships with some great schools. Strickland, a first baseman and pitcher, signed to attend Samford; Core, a third baseman, signed with Wheaton College just outside of Chicago, Illinois; and Stedham, an outfielder for the Lions, signed to play collegiately at Birmingham Southern College.

“These three young men have been an integral part of the baseball program here,” head coach Steve Renfroe said. “They are great competitors and all work extremely hard. If you come out and watch them this year, they are poised for a big year.”

Wilson Hand, a member of the Lions’ lacrosse team was the next to sign and did so with Ivy League school Brown University.

“Lacrosse is a growing sport and when we started there just really wasn’t much lacrosse in Birmingham, we started one of the first teams” said Hand’s dad and lacrosse head coach Mark Hand. “Wilson worked very hard and broke into this college level, which has made other people much more interested in lacrosse here.”

One of the crazier and more impressive accomplishments during the ceremony was the signing of twins Maggie and Sarah Adcock, who both signed soccer scholarships to play with two different Southern Conference teams. Maggie Adcock signed to play with the Wofford Terriers, while Sarah signed with the Mercer Bears.

The neat thing about this opportunity for these girls is that they will play each other in conference play every year, which led to the quote of the day from Maggie.

“I would like to thank my twin sister Sarah for always pushing me to be better and work harder, as stressed as I was at times I wouldn’t be where I am without you. I’m really going to miss you next year, but can’t wait to beat you in conference play,” she said.

The last signee to speak was swimmer Sadler McKeen, who signed to swim collegially at Notre Dame. McKeen is the top swimmer in the state of Alabama and is considered to be one of the top swimmers in the country.

“Swimming has been a huge part of my life for the past 12 years,” McKeen said. “I began swimming when I was five years old and was actually told I was to slow to be on the swim team, but I joined anyways.”

The day brought big accomplishments for all seven of these athletes and their families. Whether you are a baseball player that’s been playing the game since t-ball, a lacrosse player that played in the south and had to fight to get noticed, a set of twin soccer players continuing to play each other at the next level or a swimmer that was told he was too slow; all of these student athletes have one thing in common, hard work and perseverance, qualities that will stick with them for life because of a sports they love that taught them so much.