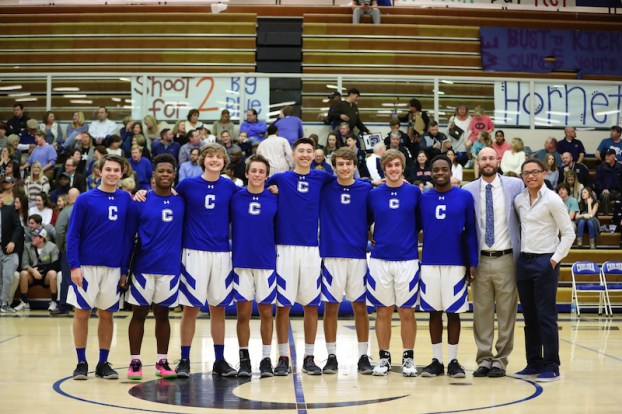 Chelsea seniors stand with head coach Nick Baumbaugh. Senior Joseph Lanzi dropped 30 points in the game to lead the Hornets to a 66-57 win over county foe Briarwood. (For the Reporter/Cari Dean)

CHELSEA – It was a special senior night at Chelsea High School for the Hornets’ boys basketball team. Joseph Lanzi has had an incredible ride through the school’s program and finished his last regular season home game for Chelsea in impressive fashion. Not only did he have a game-high 30 points, but he set a school record with eight 3-pointers in the game to lead his team to a 66-57 win over county foe Briarwood.

It was only fitting that Lanzi started the scoring between the two in what could be his last home game in the Hornets’ gym. Briarwood, who was coming off of an upset over No. 8 Calera, answered Lanzi’s basket with a 9-1 run to jump up 9-3 as Michael Hiers and Luke Miskelley hit back-to-back 3-pointers.

Lanzi answered that with a 3-pointer of his own, before the Lions, who came flying out of the gates, went on another 6-0 run to take 15-6 lead. Lanzi however hit another three, to bring his first half total to eight points, and Sam Towery hit a couple of free throws to bring Chelsea back into the game as they only trailed 15-13 at the end of one.

The second quarter was much of the same as the Lions started out on another 5-0 run that was quickly answered by an 8-2 run from the Hornets, which was highlighted by two more 3-pointers from Lanzi. After Carson Donelly hit a three and Miskelley drained a free throw, Briarwood had taken a 26-23 lead into the half.

Through the first two quarters, both teams had used small spurts of offense to account for their scoring, but in the third quarter, it was a couple of big spurts by each team. Briarwood opened the quarter on a 13-4 run behind 3-pointers from Hiers, Miskelley and Brayden Blythe. Chelsea answered over the last four minutes with their biggest offensive explosion of the game.

Jay Vickers, Lanzi, and Towery combined to hit four threes during that span as the Hornets closed the third on a 19-4 run to take their third lead of the night at 46-43 heading to the final quarter.

Chelsea carried their momentum over to the fourth period as they opened on a 9-2 run to extend their lead to 10 points. The Hornets held around a 10-point lead the rest of the way until the Lions hit a three at the buzzer to create the 66-57 final.

Lanzi led the way with his 30 points and dropped eight of Chelsea’s 11 3-pointers in the game. Towery also had double digits adding 13 points for the Hornets. Briarwood was led by 12 points from Miskelley, 11 from Hiers and nine from Carson Donnelly.

By BAKER ELLIS / Staff Writer CHELSEA – The Chelsea baseball Hornets are coming off a tough season, no two... read more