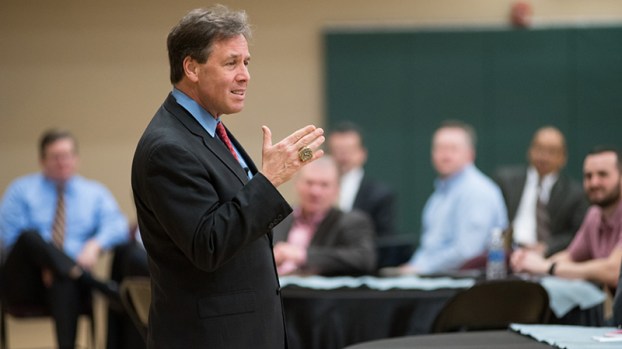 By Michael J. Brooks/Special to the Reporter

HELENA–Dr. Kevin Elko last Wednesday gave the Helena Athletic Association a taste of what he tells football players at the University of Alabama. In fact he came to the quarterly meeting of the association after spending the morning in Tuscaloosa with Coach Saban and his team.

“The problem we have today is our attitude,” Elko said. “Attitude is nothing more than the way you talk to yourself. Words are strong. Why do we let nonsense come out of our mouths instead of speaking greatness into our lives?”

To illustrate, Elko told about stepping out of the way of a wheelchair in an airport recently. Another traveler thought he was breaking into line ahead of him and uttered a profanity. Elko said his first thought was to get in the man’s face and curse him in return. Instead he chose a different path.

“Sir,” Elko said, “I’m not going to let your bad attitude become my bad attitude. And I’m going to pray for your family!”

Elko earned a doctorate at West Virginia University and makes his home in Pittsburgh. He spends his time doing motivational work with corporate clients such as Tyson Foods, Morgan Stanley, Merrill Lynch and The Hartford, and with athletic teams such as The Dallas Cowboys, The Miami Dolphins, The University of Nebraska, Rutgers, LSU and the University of Alabama.

“The number one factor in longevity is the serenity prayer used by Alcoholics Anonymous,” he said. “We have to change the things we can and accept the things we can’t change. But we can change our attitudes. We can say, ‘I’m going to enjoy my life today’ and we can quit being miserable. We can’t let our feelings rule our lives. Feelings are indicators not dictators.”

Elko said he had conversation with Saban after the tide lost to Ohio State in 2015. Saban said he’d noticed Ohio players looking at their wrists and wondered what this was about. Elko discovered Coach Meyer gave his players bracelets with the formula, E + R = O.

“Their coach drummed into their heads that the event and their response determined the outcome, and they kept blocking and tackling and won the game,” Elko said. “I worked with Alabama and came up with ‘So what? Now what?’ as a motivational phrase to help the players decide how their attitudes and actions in response to what happens will impact the outcome of every game.”

Elko told attendees not to waste their pain, but to remember the boll weevil statue in Enterprise, Alabama.

“This is the only statue to an insect in the world,” he said. “The citizens lost their cotton, but started growing peanuts and survived. They brought success out of misfortune. Our attitude shapes our future, and we control our attitude.”

Elko said successful people also determine to “be where your feet are.”

“Families don’t know each other today because they find the telephone more interesting than the people they’re with at the dinner table,” he said. “This is sad. Successful people invest in others and give their full attention to the important people they’re with. And the simple practice of writing a thank-you note every week lets people know they’re valuable to us.”

Helena Athletic Association president Gene Ingram said the club was able to schedule Elko between his visits to the University of Alabama that morning and Samford University that evening.

“He was on our list of ‘great gets’ and it was an honor to have him,” Ingram said.

Tess Gann of Pelham came to the event after hearing Elko on the Paul Finebaum radio program.

“I read [Elko’s] book, ‘The Pep Talk,'” she said. “He spun an interesting parable about a losing team that won. Players realized they were responsible for three feet on either side of them on the field. The book helped me realize I needed to be grateful for the space I’m in, do the best I can, and not worry so much about stepping into somebody else’s space and doing their work for them.”

By GRAHAM BROOKS / Staff Writer HELENA–The final week of the regular season is here and Helena and Thompson are... read more