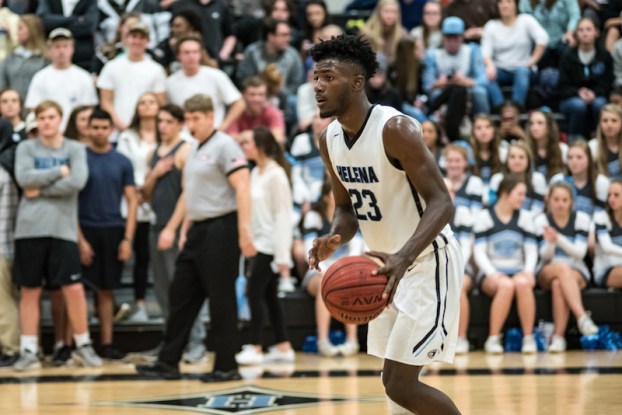 Jon Brown had a huge game as he helped his team win the Jefferson-Shelby Hoops Classic championship on Saturday, Feb. 4. (File)

HELENA – It might have been delayed for a month thanks to Icepocalypse part two, but the No. 3 Helena Huskies (23-6, 2-2) are finally the inaugural champions of the Jefferson-Shelby Hoops Classic after taking down Shades Valley 54-38 in the championship game on Saturday, Feb. 4 at Helena High School.

This marks the second tournament championship for the Huskies after they won the Fort Payne tournament over the Christmas holiday. They also won the consolation bracket of the Big Orange Classic during the Christmas break, which shows they have what it takes to put together a string of wins during a tournament, something that excites head coach Chris Laatsch as they head into post season play.

“They’re hungry,” Laatsch said simply of how they do it. “They want to be the best they can be. We talk about enjoying the process along the way, but ultimately we want to win that big one at the end.”

The game was a bit of a defensive battle for the most part as both teams used the full court press to slow down the pace of play.

After going into the fourth only having scored 30 total points leading 30-25, Helena finally created a bit of momentum and didn’t let up as they exploded for 24 points in the final period to run away with it.

“We were finally able to get it into an up and down game,” Laatsch said of the difference in the final quarter, “We were able to get some stops and turn them into transition points.”

Early in the game it was a struggle for both sides. The first two minutes went scoreless as neither team could make a look due to contested shots. Finally, at the 5:55 mark, Shades Valley opened the scoring thanks to a turnover by the Huskies that led to a wide open fast-break layup.

Helena answered immediately with a beautifully run backdoor cut from Nate Andrews and a just as beautiful assist from Jon Brown. This became the story of the game real quick as the Huskies used another back door cut on the next possession this time Brown was on the receiving end of a beautiful lob pass from Dionte Tolbert that Brown was able to go up and throw down for the alley-oop.

The rest of the quarter was back-and-forth as each team answered the other shot for shot, but after the slow start shooting, Helena was able to hit two 3-pointers in the last two minutes of the quarter to take an 11-8 lead.

Brown established himself early in the game as Helena’s main offensive threat and showed why he is one of the best players in the state throughout the game. In the second period he was battling through triple teams but was somehow able to create space and either find the open man or an open shot.

“Great players do whatever their team needs at that moment,” Laatsch said of his senior standout. “He just does whatever we need at that time and has an unbelievable feel and talent to actually get it done.”

Both teams continued the slow pace throughout the second quarter, but thanks to some more heroics from Brown, the Huskies were able to take a 21-16 lead at the half. After a teammate lost control of the ball with just a few seconds to play, Brown picked it up and through it off the glass to drain a mid-range jumper at the buzzer.

The story of the third quarter, and really the rest of the game, was the backdoor cut. Shades Valley’s head coach could be heard on several occasions yelling, “watch the backdoor,” but Helena kept running it to perfection and started the third on a 6-2 run.

Another bright spot of momentum in the third quarter was Justin Stuckey knocking down his first three of the game. The made shot by Stuckey, who is normally a sharpshooter but had struggled up to that point in the game, got coach Laatsch and the bench extremely excited.

It was clear the Huskies now had momentum and going into the fourth with that 30-25 lead, they turned up the heat. The 24 points in the final quarter was just six shy of what they had in the entire game up to that point. Scoring 19 in the first four minutes of the final period definitely helped as they put the game away early in the quarter.

Brown led Helena with a game-high 22 points and was probably close to double-digit assists as well. Stuckey ended the game with 10 points to give the Huskies two double-digit scorers.

By ALEC ETHEREDGE | Sports Editor PELHAM – It was senior night for the No. 1 team in Class 6A... read more