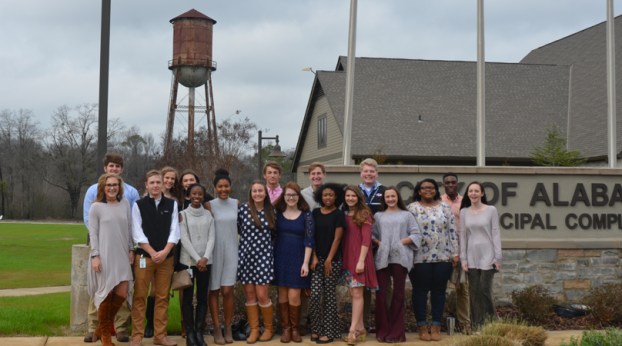 Members of the Alabaster Teen Council had the opportunity to learn about the different functions of the city’s departments while following officials. (Reporter photo/Amalia Kortright)

ALABASTER- The Alabaster Teen Council spent a day shadowing city officials and touring Alabaster facilities on Wednesday, Feb. 8. Members of the council were divided into groups to follow members of several city departments and observed what it takes to run a city.

“We’re just trying to take these teenagers on the council and expose them to the different compartments within our local government, just so they can see how everything works,” said Alabaster Finance Director John Haggard. “We want to expose them to as much as possible to how the government works and how they can be more involved in the government.”

Haggard said this is the second time that Alabaster Teen Council members have shadowed officials.

“This would be the second year,” Haggard said. “I think the mayor was the one who came up with the idea.”

Tyger Quarles, who chose to shadow the Alabaster Fire Department, said he admired the dedication that Alabaster firefighters have to keeping the city safe.

“When they went on a call, we went with them, and when they were chilling at the station, we were with them. I noticed that they were willing to drop what they were doing to help at any time,” Quarles said.

According to teen council member Noah Tanner, shadowing the Alabaster Police Department gave him a new perspective on how necessary police are for the city.

“I thought it would be a good way to see what they do, while they are constantly out there risking their lives every day,” Tanner said. “I learned that there is a lot more to the police department than the patrol division.”

Mary Kathryn Grill said participating in the Alabaster City Municipal Court could potentially help her in her future career.

“I got to listen in on the cases that were called, and I got to call names. I got to hear the attorneys plead their cases for their clients, which was really cool. I didn’t realize that so much crime happened so close to home,” Grill said. “I’m interested in law and journalism, so this gives me an idea of what I have to look forward to.”

According to Haggard, officials enjoyed showing students about the procedures and functions of their jobs.

“It was a pleasure. All of the kids I had were super interested and super attentive. It was good to spend some time to show them how we keep our government going,” Haggard said.

Haggard said he hopes that continuing to stay involved with the teen council will ultimately strengthen the relationship between the Alabaster government and residents.

“To take any opportunity to teach citizens, whether they’re teenagers or adults, about how our government works means that we can be transparent within the community,” Haggard said.

The Alabaster Teen Council concluded the day by touring the city of Alabaster’s Wastewater Treatment plant.