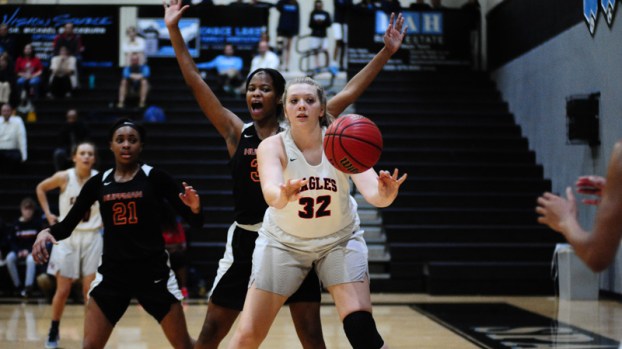 Oak Mountain’s Hannah Edwards passes the ball out of the post while being defended during a game against Huffman in the first round of the Class 7A, Area 6 tournament on Wednesday, Feb. 8 at Spain Park High School. (REPORTER PHOTO/STEPHEN DAWKINS)

HOOVER – The season came to an end for Oak Mountain High School’s varsity girls basketball team with a 41-28 loss to Huffman on Wednesday, Feb. 8, in the Class 7A, Area 6 tournament at Spain Park High School.

Oak Mountain, the No. 2 seed in the tournament, led 9-6 after one period of play but was outscored by No. 3 seed Huffman 14-9 in the second period.

Still, the game was tied at 18-all late in the first half.

Huffman’s Jayla Crawford scored on a putback with 23 seconds left on the clock until halftime to give the Vikings a lead that would never relinquish.

Huffman outrebounded the Eagles (14-9) and played tight defense, contesting almost every OMHS shot attempt and blocking many of them.

Oak Mountain was unable to score in the third period until Hannah Edwards converted the second of two free throw attempts with 27 seconds remaining in the quarter.

It was the only point scored by the Eagles in the frame, and they trailed 27-19 going into the fourth.

With about 4:30 on the clock in the final period of play, Kennedy Smith made two from the charity stripe to cut the deficit to 30-25, but that was as close as Oak Mountain would get.

Huffman played keepaway with time winding down, and two free throws by Crawford with a little over a minute left in the game made the score 36-25, and a turnover by Oak Mountain on its ensuing possession sealed the deal.

Smith and Jacoby Sims led OMHS with six points each, while Edwards had five points and Clara Fuller had four.

Crawford led all scorers with 21 points.

The Vikings advance to the championship game of the area tournament at 6 p.m. on Friday, Feb. 10, against host Spain Park. Win or lose in the area title game, they will head to the Northeast Regional tournament beginning Feb. 16 at Jacksonville State University.

Oak Mountain’s Sims and Kailey Rory were named to the all-area team.