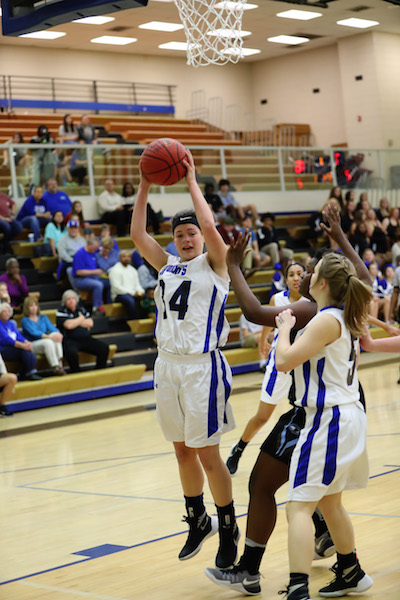 Michaella Edwards dropped 40 points and 11 rebounds in Chelsea first round area tournament game with Pelham. (For the Reporter/Cari Dean)

HELENA – Chelsea (17-12) got all they wanted and then some from Pelham in the first round of the Class 6A Area 8 girls tournament on Wednesday, Feb. 8, but thanks to a double-double from Michaella Edwards that featured 40 points, the Hornets were able to grab a 60-50 win to keep their season alive.

Edwards was the only Chelsea player in double figures at the end of the game and the lack of contribution clearly hurt the Lady Hornets early in the game.

Pelham, who probably played their most complete and best game of the season, came out and took advantage of Chelsea’s struggles as the Panthers took an 11-10 lead after one quarter of play.

The Panthers’ offense wasn’t eye opening in the first half, but their defense was playing lights out. They were able to grab another one-point advantage in the second quarter because of their presence on the defensive end as they outscored the Hornets 10-9 in the period and took a 21-19 lead into the half.

All year, Chelsea has been a team known for turning the ball over, but in this game they limited themselves to just 16, which was a big reason they were able to make a run in the second half.

Pelham’s offense still struggled to get going in the third quarter, but on the opposite end, the Hornets were waking up. They put up 14 points in the quarter and held the Panthers to just eight as they had come back and taken a 33-29 lead heading to the fourth quarter.

The final period featured one of the best offensive quarters of basketball Pelham had produced this entire year as they finally woke up and started making some baskets. They put up 21 points in the fourth, but their strong defense from early in the game paid the price as they struggled to stop Chelsea from scoring as the Hornets put up 27 to win by the final of 60-50.

It was a valiant effort from Pelham, who continued to get stronger near the end of the season and with a lot of extremely young players on the team they will progress next year.

Edwards’ 40 points and 11 rebounds were game highs as she led Chelsea the entire night accounting for more than 65 percent of their offense. She also shot 20-22 from the charity stripe, which was good enough for 91 percent. Allie Miller only had four points, but grabbed seven rebounds, five assists and three steals to help the Hornets.

Pelham was led by Jamila Wilson with 22 points, while Angel Smith and Toniya Person added 10 and eight points, respectively.

HOOVER – Spain Park’s varsity girls basketball team used a 13-0 run at the end of the game to earn... read more