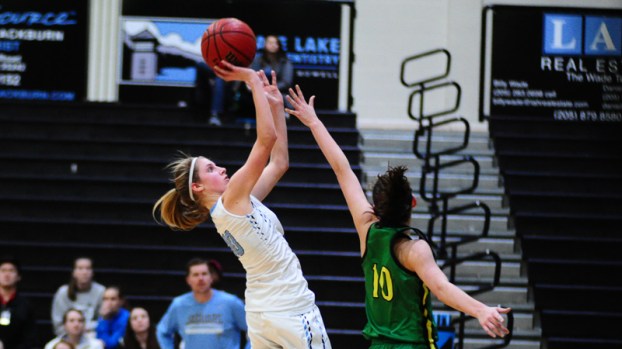 Spain Park’s Sarah Ashlee Barker shoots over a Mountain Brook defender during the first round of the Class 7A, Area 6 tournament on Wednesday, Feb. 8 at SPHS. (REPORTER PHOTO/STEPHEN DAWKINS)

HOOVER – Spain Park’s varsity girls basketball team used a 13-0 run at the end of the game to earn a hard-fought 49-41 win over Mountain Brook in the first round of the Class 7A, Area 6 tournament on Wednesday, Feb. 8.

The win advances Spain Park to the championship game of the area tournament, which the Jaguars are hosting, at 6 p.m. on Friday, Feb. 10.

No matter the outcome of the area title tilt, SPHS will advance to the Northeast Regional tournament beginning on Feb. 16 at Jacksonville State University.

As the top seed in the area tournament, and after two regular-season wins over No. 4 seed Mountain Brook, a victory over the Spartans was perhaps expected, but the game was anything but a cakewalk.

MBHS opened the game with two consecutive three-pointers by Kate Bumgarner, led by a score of 41-36 early in the fourth period and gave the Jaguars fits in between.

Spain Park’s first score of the game came when Ahrielle Parks pushed the ball in transition then stopped and sank a mid-range jump shot to make the score 7-2 with 5 minutes on the clock in the first period.

About a minute later, Claire Holt leapt into the air to steal the ball away from the Spartans at midcourt and then finished with a lay-in to cut the deficit to 9-6.

Another minute into the period, Sarah Ashlee Barker came up with a steal and passed to Holt for the bucket to give the Jags their first lead at 10-9.

Holt scored again at the buzzer to bring the score to 15-12 Spain Park at the end of the first period.

Bumgarner drained another three-pointer on Mountain Brook’s first possession of the second quarter to tie the game at 15-all, and the Spartans retook the lead by stealing the ensuing inbounds pass.

The Spartans played aggressive defense in the game, but the Jaguars also hurt themselves by missing several shots at close range.

Still, Spain Park held a 25-22 lead at halftime because of a Parks three-pointer with 55 seconds left in the second period.

Mountain Brook’s long-range shooting again brought the Spartans back, as Hannah Bartels was good from beyond the arc on her team’s first possession of the second half to tie the score.

MBHS built a lead, but Holt kept Spain Park close as she stole the ball away and scored despite being fouled with 1:44 left in the third period. The free throw made it 35-34 Mountain Brook, and the Spartans also led by one at the end of the quarter.

Mountain Brook opened the fourth with four straight points to lead 41-36 and stole a possession when a Spain Park guard was not looking as the ball was inbounded.

However, the Spartans could not convert the extra opportunity into points. The stop by the Jags defense was a turning point in the game, as they scored the game’s final 13 points for the comeback win.

Holt made eight of her 11 free throw attempts.

Spain Park’s defense also came up big at the end of the game, including a late block by Barrett Herring.

Parks finished with nine points and was named to the all-area team along with teammates Holt and Herring.

HOOVER – The season came to an end for Oak Mountain High School’s varsity girls basketball team with a 41-28... read more