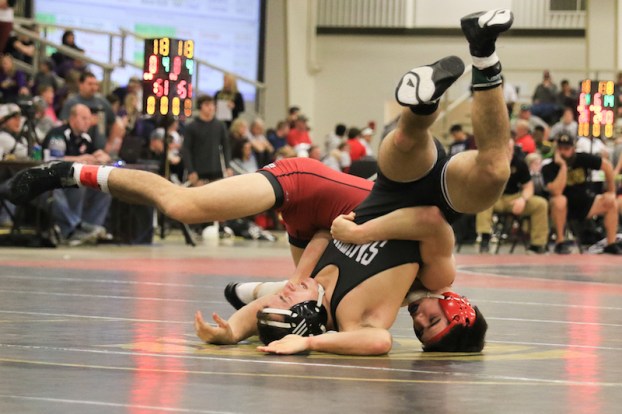 Thompson's Derek Hussey had an impressive run at a first place finish in the 145-pound division and will look to win a state championship this weekend. (For the Reporter/Dawn Harrison)

The winter sports season is coming to a close and along with it comes the conclusion of the wrestling season. Last year the county had two teams place inside the top three of the state championship as Oak Mountain and Thompson finished second and third, respectively.

Last year 48 wrestlers from across Shelby County made the state meet, and this year, although the number dwindled slightly, there will also be strong representation from county teams. After Super Sectionals took place on Feb. 10 and 11, a total of 38 county wrestlers punched their ticket to the state wrestling tournament in Huntsville Feb. 16-18.

Thompson and Oak Mountain, yet again, will have enough wrestlers participating to compete for a team state championship as the Warriors are sending nine wrestlers and the Eagles will have eight in attendance.

Those 38 wrestlers who qualified were part of eight different teams within the county and did so with strong Super Sectional performances.

The Warriors had four win first place in their respective weight class at the South Super Sectionals, which included Sam Latona, Chandler Akins, Gabe Hixenbaugh and an extremely impressive run by Derek Hussey. As a team they finished second behind Hoover, and one place ahead of Oak Mountain at three.

The Eagles’ Blake Randle and Barrett Blakely were the only two to win first place at super sectionals.

In 6A Alex Montgomery of Pelham as well as Brantley Ledbetter and Sam Ingram of Chelsea all made it to the first-place match of their respective weight class, but lost in the championship match.

Nobody wrestled in a first-place match in the 1A-5A division, but four wrestlers from the weight class did qualify for state. Shelby County will have three wrestlers advance, while Montevallo will have one.

Below is a list of each wrestler and the weight class they will be fighting in during the state championship later this week.