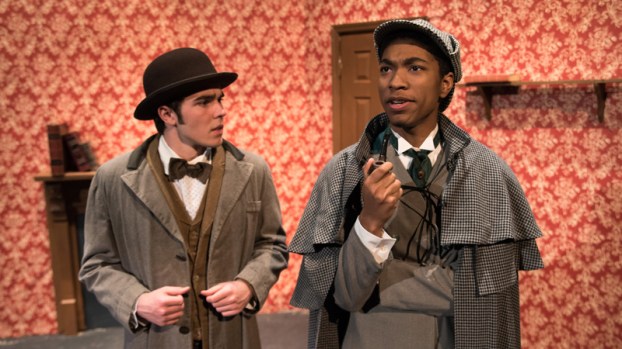 “This production is a retelling of ‘The Hound of the Baskervilles,’” SPHS theatre director Eric St. John said. “We retain the mystery aspect, but the unique part is we have a cast of six students where four of the six actors are playing multiple roles.”

The production will take place at the school’s theatre beginning with performances Feb. 16-18 beginning at 7 p.m. and Feb. 19 at 2 p.m.

St. John said the play is written by Ken Ludwig, and includes humor, mystery and some on-stage costume changes for the actors.

“The students have worked really hard,” St. John said. “We have rehearsed since Jan. 3 working during the week, and we have had three weekend rehearsals with some of the technical crew working on Saturdays and Sundays.”

St. John said the play is appropriate for adults and children ages 8 and above.

“It is not as goofy as some plays can be for a younger audience, but I think children 8 and older would be able to enjoy it,” St. John said.

SPHS senior Jace Coleman plays the lead role of Sherlock Holmes, and said he has enjoyed portraying an “intellectual character.”

“It has been enjoyable to have some of the other characters who are on stage with me switch into various characters,” Coleman said. “It is somewhat of a challenge to stay focused, but I have had fun with it.”

Coleman auditioned for the lead role, after previously reading the books depicting the character of Sherlock Holmes written by Arthur Conan Doyle.

“I was familiar with the character of Sherlock before I auditioned, but I would say the character I portray in the play is more energetic and spontaneous than the usual portrayal,” Coleman said. “It has been a lot of fun for me though to play Sherlock.”

Senior Cameron Ferguson is the student director of the production, and has worked alongside St. John to ensure the show “goes on” as it should.

“This is the second show I have directed, and it was a little different for me to watch a show as opposed to performing in one, but when you sit and watch something you take away a different perspective,” Ferguson said.

Ferguson hopes to pursue directing roles as a potential career in the future with an emphasis on being a film director.

“I enjoy being behind the scenes,” Ferguson said. “My goal is for the show to be the best it can be.”

Ferguson said he hopes the audience will take away the hard work and dedication each cast member has devoted to the production.

To purchase tickets, call 439-1465 leading up to the shows, or tickets can also be purchased at the door.

By GRAHAM BROOKS / Staff Writer HELENA–All of the fifth graders and half of the fourth grade class at Helena... read more