COLUMBIANA- Locals gathered at Columbiana United Methodist Church on Thursday, Feb. 9 to pay their respects to Anne Klein Davis, who was active in the community during life. Davis passed away on Monday, Feb. 6, at the age of 88.

“She was just a very sweet, gentle and kind person,” her daughter, Carolyn Stricklin, said. “She was a very humble person, and a true Southern lady.” 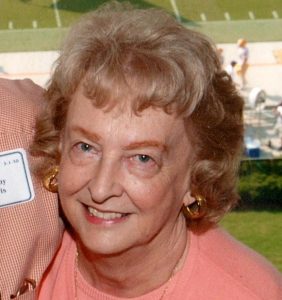 Davis grew up in Opelika and graduated from Auburn University in 1950, where she earned a degree in sociology. While in college, Davis was a member of Chi Omega Sorority and was involved in the Auburn Plainsman. She was later inducted into the Auburn University 1856 Society about 17 years ago.

“She loved her Auburn Tigers. When we would watch football games,she would get so excited and pat me so hard my back would have bruises,” Stricklin said.

After she moved to Columbiana in 1956, Davis became a member of the Columbiana Culture Club, the Columbiana Library Board, Daughters of the American Revolution and the Columbiana Beautification Board. She served on the Shelby County Arts Council’s first advisory board.

“Mom loved Columbiana, being involved in the community, meeting people and working alongside them to make the community a better place,” Stricklin said.

Davis and her late husband, Jimmy, were the original owners of Davis Drug Co. on South Main Street in Columbiana. She and her husband married in 1951, and she worked as a social worker in Lee County while her husband went through pharmacy school.

“She did a great job, and she loved being a social worker,” Stricklin said. “She would have to go down dirt roads to isolated places for work, and he would take his pharmacy books in the car because he didn’t want her to be by herself.”

Jimmy Davis worked at a pharmacy in Anniston before they moved to Columbiana to start Davis Drug Co. Ownership of the pharmacy has since been passed down to their son, Jim.

“Mom was Dad’s backbone, helping him in the store while raising small children,” Stricklin said. “She scooped ice cream, wrapped gifts, stocked, did the deposit and ran the cash register. She worked alongside Dad in the store.”

Family friend Brenda Tidmore said she had many fond memories from working at Davis Drug Co.

“I was a young, teenage soda jerk for Jimmy and Anne at Davis Drug. Anne could dip ice cream with the best of us,” Tidmore said. “We shared laughter and food, and could soften each others’ hurts.”

The funeral took place on Feb. 9 at 10 a.m., and was sponsored by Bolton Funeral Home. Davis was buried at Pinelawn Gardens in Columbiana.

Mobile man arrested for breaking and entering, theft in Alabaster

ALABASTER- A Mobile man is currently being held at the Shelby County Jail after he was arrested on Wednesday, Feb.... read more