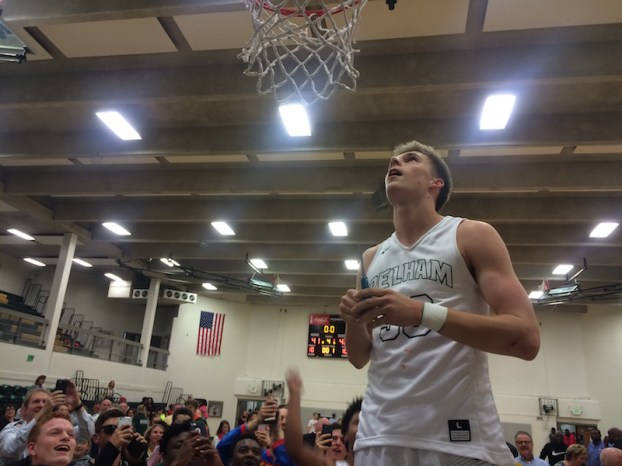 Mitchel Rottier prepares to cut down the net after hitting the game-winner at the buzzer to extend Pelham’s basketball season. (Reporter photo/Alec Etheredge)

PELHAM – Mitchell Rottier has faced plenty of pressure packed moments in his three years as a varsity player at Pelham, but according to Pelham head coach Joel Floyd, none even came close to the pressure of what he faced in the Panthers’ Tuesday night, Feb. 14, win or go home game with Hillcrest-Tuscaloosa.

Coming out of a timeout with 4.1 seconds left to play, Pelham was down 40-39 and their season was on the verge of ending. Rottier took the inbounds pass and looked to get it to senior standout Alex Reese, but quickly realized that option was taken away and things were in his own hands.

He then put up a shot just inside the 3-point line that traveled perfectly threw the bottom of the net to lift his team to victory and continue Pelham’s season. The crowd immediately rushed the court and a mob scene took place around Rottier as his teammates lifted him in the air in celebration.

“I was supposed to throw it down to Reese, but they already knew he was coming so they double teamed him and I just got open and shot it,” Rottier said of the play that was drawn up. “In the playoffs you need stuff like that to happen and now that we got it out of the way we are going to keep winning. If we play our game nobody will be able to beat us.”

The fact that Pelham even had a chance to win the game was pretty miraculous considering the struggles they had all the way up to the final couple of minutes.

It was clearly a defensive battle early on as Pelham only held a 9-6 lead after one and went into the half trailing 15-13. Neither team had much offense and Pelham was unable to find any sort of momentum as Justin Allison sat the entire second quarter in foul trouble and Reese was battling double teams.

The two leading scorers for the Panthers only combined for eight points in the first half.

“They’re one of the better coached teams in the state and they always play tough defense,” Floyd said of the challenges Hillcrest presented. “We just didn’t adjust to it very well. We were lucky to hang around and guys just made some plays, which is what playoffs are about.”

Although the Panthers were able to get within one at 22-21 in the third quarter, the Patriots maintained a five-to-six-point lead throughout the period and took a 27-23 lead into the final period.

A big difference maker at that point in the game was free throws. Through three quarters, Pelham was 6-13 from the line.

“You have to make free throws,” Floyd said. “I looked over to check on that at one point and heard we were 6-12 while down by five, that was the difference maker at that point.”

Rottier started the final period with a 3-pointer to bring the Panthers to within one, almost as a preview of what was to come. Pelham still faced several struggles trailing by seven with just 40 seconds left to play.

Allison, who had eight in the quarter, wasn’t ready to let his team’s season end just yet as he hit a three to make it 37-33 with 37.5 to play. This set off a string of 3-point plays as Rottier followed with a deep bomb to bring the Panthers within two at 38-36.

The Patriots answered with two free throws, but Allison came right back down and was fouled shooting another 3-pointer with 7.7 left on the clock. He clearly got the message about making free throws as he calmly sank all three to bring the Panthers within one at 40-39.

The Panthers immediately fouled Hillcrest’s Jalon Johnson to put him on the line with 5.5 remaining. Johnson had shot eight free throws in the quarter up to that point making seven of them. He was almost a sure shot, but both missed off the front of the iron and Pelham grabbed the rebound immediately pushing it over the half court line to call a timeout.

Coming out of the timeout with 4.1 seconds left to play and Allison fouled out, Rottier hit “the shot,” that he will remember for the rest of his life to give the Panthers a 41-40 win and a spot in the 6A Sweet 16.

“Mitchell made a play,” Floyd said of the shot. “We got the ball to him and we had a couple of things we were looking for after that, but they took it away and he just made a play. That was amazing.”

Allison led Pelham with 16 points, while Rottier added 11 including the buzzer beater. Reese was limited to just eight points in the contest, but was double teamed the entire night.

Pelham’s goal the entire season has been to win a championship and they are now one step closer to achieving that milestone.

“These guys certainly never give up and never think that it’s over,” Floyd said. “This is certainly one to build on. One. Game. At. A. Time. That’s all that matters, just one game at a time. Survive and advance.”

By ALEC ETHEREDGE | Sports Editor VALLEY – For the second time in less than a week, the Shelby County... read more