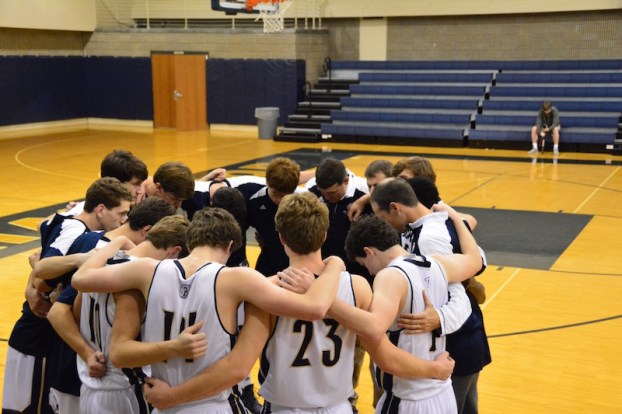 Briarwood fought as a team all season long, which led to their first playoff appearance since 2006. (File)

TUSKEGEE – Briarwood’s first postseason appearance since 2006 required about a 2:30 drive southwest to Tuskegee on Tuesday, Feb. 14, to take on the Booker T Washington Golden Eagles in a sub-regional matchup.

If you made the trek as a Lions’ fan you got a treat with one of the more entertaining basketball games you will see. At this point in the season it’s win or go home and both Briarwood and B.T. Washington played like it as they put on a show for the crowd.

The Lions took a 39-37 lead into the final period of the game, but thanks to three early steals by Barrett Tindall, Briarwood was able to maintain that lead and eventually go up 44-41.

Briarwood led for much of the game and by as many as seven in the third quarter, but the Eagles made a big comeback as they went on a 10-3 run midway through the fourth quarter to take a 51-47 lead.

The lions answered quickly with a 3-0 run to get within one with 1:06 left to play. After each team traded layups, B.T. Washington held a 53-52 lead, which led to a timeout by Briarwood head coach Bobby Kerley with 54 seconds to go.

Unfortunately for the Lions, they weren’t able to hit another basket in the final 50 seconds as the Eagles knocked down two free throws to win 55-52.

Despite the loss, Briarwood had so much to be extremely proud of. This senior class helped turn this program into a contending team and with several of their leading scorers coming back, this team is already a favorite next year.

It wasn’t the outcome they wanted I’m sure, but they heart they fought with was incredible. Both teams played tough with several lead changes involved and neither team gathering more than a four-point lead in the first half.

During the first half, B.T Washington let Joe Phillips loose, which became a trend throughout the game. He went off for nine in the first quarter and had 13 at the half.

Still, Briarwood used a steady consistent team effort and only trailed by three at the end of the first quarter and at the half.

While Phillips was still the go to in the third quarter, he was limited to just seven points, while the Eagles as a team were held to nine in the period as Briarwood used a strong defensive effort to take control of the game.

In the fourth however, B.T. Washington was just too much offensively putting up 18 points for the win.

Tindall led the Lions with 18 points in the contest, while Carson Donnelly added 15.

Briarwood struggled guarding Phillips all night as he posted 16 more points in the second half leading to a game-high 29 points for the Golden Eagles. He accounted for more than 50 percent of their offense on the night.

The Lions lose Tindall, Luke Miskelley, Trip Burns and Steven Giddens, but will get back Donnelly, Michael Hiers and Brayden Blythe.

By ALEC ETHEREDGE | Sports Editor MONTEVALLO – In an offensive explosion that featured three quarters of 20-plus points in... read more