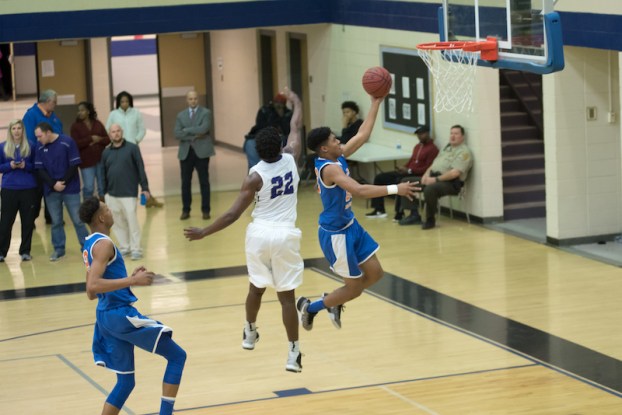 TreShawn Brown lays a ball in during a game earlier in the season. He had 13 points and five rebounds in the Bulldogs' Sub-Regional win. (File)

MONTEVALLO – In an offensive explosion that featured three quarters of 20-plus points in a row, the Montevallo Bulldogs put up 84 points in an easy 84-60 win over Holy Family Catholic in a Sub-Regional matchup at home on Tuesday, Feb. 14.

The Bulldogs, now 25-4 on the season, have won 15 consecutive games and are now headed to the 3A Sweet 16 at Alabama States’ Dunn-Oliver Acadome.

From the opening tip you could tell Montevallo had one thing on their mind, win and advance. They started out strong in the first quarter going up 15-9 at the end of the period, which was their worst offensive quarter of the game, but their best defensive performance.

Starting strong set the pace for the Bulldogs the rest of the game as they kept their feet on the accelerator in the second quarter. They put up 22 points, which still wasn’t as strong as their second half offensive production, but they outscored the Tornadoes by seven to extend their lead to 37-24 at the half.

In the final period, the Bulldogs put up 23 more points to give them their third consecutive 20-plus point quarter and a total of 69 points in the last 24 minutes of play. Their offense was just too much for the tornadoes to overcome.

When it was all said and done, three Montevallo players finished the game with double figures, which honestly isn’t a shock at this point. They have proven that anybody on the team can go out and put up double digit points and rebounds on any given night.

Montevallo will play American Christian on Saturday night at 7:30 p.m. at Alabama State.