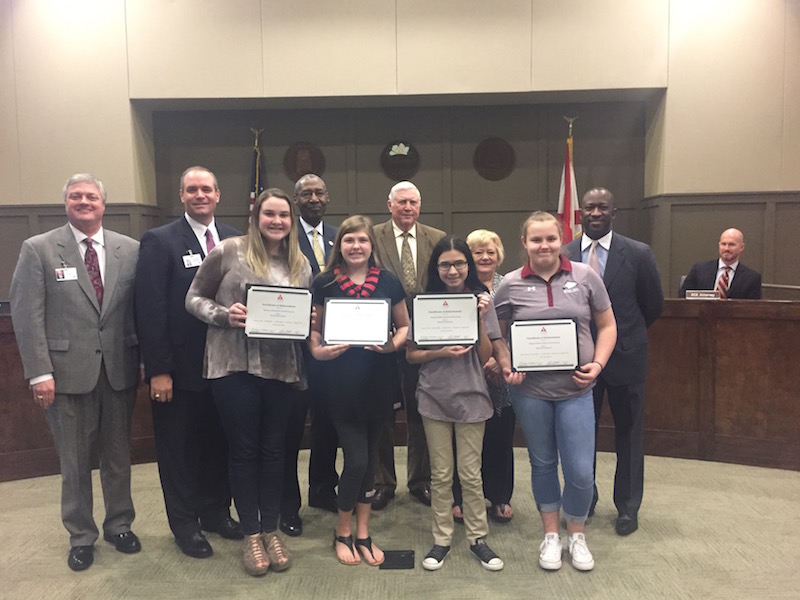 The Thompson Middle School Girls’ Bowling team was recognized for their achievements this year during a recent Alabaster Board of Education meeting. (Photo by Emily Reed.)

By Emily Reed/Special to the Reporter

The Thompson Middle and High School bowling teams have enjoyed a successful year with multiple achievements for both the boys’ and girls’ teams.

“The kids worked very hard this year, and it showed,” said Chris Hollingsworth, Thompson High School Varsity Bowling Head Coach. “I believe they will do even better next year.”

Members of the Alabaster Board of Education recognized the bowling teams for their achievements this year during the Feb. 13 meeting.

“Our bowling program is young, but we have been very well represented,” said Alabaster City Schools Superintendent Wayne Vickers. “We want to thank the parents, and the coaches for doing such a great job, and next year we hope to win the championship.”

The middle school boys team were champions of both the Baker Bash Tournament, held Nov. 10 at Oak Mountain Lanes in Pelham and the Metro South League Tournament, held Dec. 9 at Vestavia Bowl in Vestavia.

The middle school girls team was recognized as champions of the Metro South League Tournament on Dec. 9 at Vestavia Bowl.

The high school girls varsity team became champions at the Let’s Get It Rolling tournament Oct. 26 at Vestavia Hills, qualified for first place with an undefeated area record of eight and zero at the AHSAA Area 7, became the AHSAA South Regional Championship tournament champions Jan. 19-20 at Gulf Bowl in Foley, and were the semi-finalists of the AHSAA State Championship Tournament Jan. 26-27 at Oak Mountain Lanes in Pelham.

Students present at the BOE meeting were recognized individually for their accomplishments.